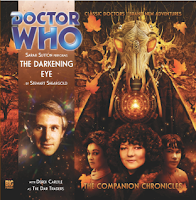 What’s it about: While investigating a debris-littered battlefield in deep space, the TARDIS crew are salvaged by an ancient race of collectors known as Dar Traders. Separated from the Doctor after an accident, Adric, Tegan and Nyssa find themselves at the mercy of the Traders’ curiosity. But the Traders have salvaged a cabinet from the battle that could be very dangerous indeed. What does the suave assassin, Damasin Hyde, know of the cabinet? And why is everybody so interested in the missing Time Lord? To find the Doctor, the TARDIS crew will have to enter a violent inter-planetary war. Where someone will die, and it will change everything

Alien Orphan: This is a great chance to see what Nyssa got up to when she left the Doctor, caring for the Lazars patients and trying to will them to live. Sometimes if she thinks about the destruction of Traken for too long she thinks she will go mad. Everything and everyone she loves was wiped out in as quick of an action as it would take to strike a match. Despite the beliefs of her people, Nyssa knows there are some evils that must be faced. The Doctor showed Nyssa wonderful and terrible things. She always gets a strange feeling when the TARDIS dematerialises and often feels demoralised at the loss of life that occurs on their travels. It was time for Nyssa to leave the Doctor, she had to. There is something in the idea of exploring the point between life and death that struck a harmony in Nyssa, a beautiful marriage of the scientific and the spiritual. Death is attracted to her. Does she rely too much on the Doctor? It hurts Nyssa more than she can say to think that there is a man out the with her fathers face causing what pain he can to others. How could she destroy the one thing she has left of her father? Nice to see Nyssa staring Tegan down when she starts complaining. Nyssa’s heart stops for three minutes but the Trader brings her back. She has natural defences in death. There are those who can lay claim to a perfect innocence, like Nyssa. Nyssa believes that she survived the Lazars disease because of what she went through with the Dar Traders.

An English Gentleman: Leaps into danger with a cavalier recklessness. Always in the wrong place at the right time…or is that vice versa? The Doctor always survives but every time there is a possibility that he wont.

Trashy Tegan: One thing this story demonstrates is that given the correct material the three very different companions in season nineteen could stimulate some real drama, a conflict of ideologies. Unfortunately the other thing that it shows off it reveals is that that is impossible given their extreme personalities. Sarah Sutton gets Tegan’s shrillness and Adric’s bossiness perfect but unfortunately when it comes to something as morally ambiguous as an peoples opinions of death you need far more realistic or at least toned down characters to bring it to life. I am very pleased that Sarah Sutton chose to represent Tegan as a strident individual and not try and conjure up an embarrassing Australian accent. She has a vein of sarcasm that makes the Doctor tense up.

Spoilt Brat: The most celebratory cliffhanger of all time – Adric is stabbed with a sharp dagger and crumples to the ground! Imagine the collective cheer that rang when people first listened to this release! Gah saved by an unfortunate quirk of biology…if only someone could have whispered in the guy’s ear that the Alzarian heart was on the other side of the chest! I’m glad to see Adric portrayed authentically as a bossy know it all, just how he was in season nineteen. Sounds truculent and is used to being told off! ‘Just because you don’t understand their culture, it doesn’t make them evil!’ – even with Sutton (excellently) playing the role I still want to strangle the condescending little rat. Death follows Adric closely (waiting for him…).

Sparkling Dialogue: ‘We must trade…’

Great Ideas: Nyssa once went beyond death. Dar traders eating the dead of other races? The Traders vessel’s walls are covered with the dead, eyeless faces staring out as you walk through the corridors. They wish to see the threshold of death but be able to come back into the corporeal universe afterwards. The collect death but they cannot become it but they study it as an art and an experience. They could possibly build up immunity to every disease going. Their machine is made of dwarf star alloy, a very dense metal which is known to help travel between dimensions. The perfect assassin – a man who cannot be killed. The threshold is absolutely, perfectly silent, a place between both realms.

Audio Landscape: Heart monitor, oxygen mask, the console room sounds like a large, echoing space, the hissy voices of the Traders, the door portal materialising, a planet in autumn – crows whirling in the sky, leaves hushing in the wind, the assassins gun a blast of light and a terrible, terrible crack, stones crumbling, leaves whirling.

Isn’t it Odd: What a shame to write the Doctor out of the story so quickly, I would have loved to have seen the enjoyable chemistry between him and Nyssa brought to life by Sutton. The Doctor is talking about blowing a whole in the universe and unleashing death on a catastrophic scale…so why does it all sound so boring? ‘The spear was removed from Adric’s throat!’ – oh what a shame. Having listened to the story I would have much preferred to hear a tale about Nyssa coping with the problems with Lazars disease but I can take some small comfort that her adventures post-Terminus will be picked up in a later date.

Result: What with the Great Space Elevator, Empathy Games and now The Darkening Eye all being less than stellar efforts I am starting to wonder if the companion chronicles might have run out of steam in their third season. The script teeters on the edge of something interesting but never quite has the guts to explore its moribund theme through its characters, instead pushing on through some pretty lifeless set pieces. Sarah Sutton is an extremely underrated performer, she is by far my favourite regular of the Davison era and it disappoints me to see that although Stewart Sheargold has given her some development the tone of the piece is cold and dreary, precisely the sort of feelings people usually unfairly associate with Nyssa. Ken Bentley’s direction is nowhere near at its best here either with no dramatic moments beyond the cliffhanger and a general lack of atmosphere. Lacking clarity and cohesiveness, this is one memory Nyssa was better left forgetting: 4/10

Buy it from Big Finish here: http://www.bigfinish.com/36-Doctor-Who-The-Companion-Chronicles-The-Darkening-Eye
Posted by Doc Oho at 15:59

I rather enjoyed this particular story, it's concept was pretty intriguing.

It's odd, I tend to find I generally like things more on relisten, it happened when I redid the monthly range, vienna, Graceless Unit dominion and excelis.
It has already happened several times with the companion chronicles, ---- but obviously not with this one.
First time through I did enjoy this one. Tragic, gentle Nissa is someone I've always warmed to, and while I never really noticed them as much in The Death collectors, the Da traders are one of the most alien aliens we've come across, a race who's motives and opinions really aren't quite understandable. Indeed I give bf a lot of credit for giving us an alien race who are neither good, nor evil, nor just human with addons but very much their own rather inscrutable culture, the Death collectors just had them bobbing around in dark and space, but taking them into a war zone and showing just what they do with boddies was a lovely way to show how alien these creatures are.

I also first time around enjoyed Nissa's interplay with the assassin damasin hyde, and especially liked the artistic exploration of the line between life and death explored from the perspective of someone who, herself straddles the boarders between art and science, indeed one thing I love about Nissa in the audios is how her Tracanite culture and philosophy is far more understood, as well as her feelings for Tremas.

The problem is, where first time I just enjoyed this as pure art, the da trader's ship covered in death, the cataloguing, the assassin damasin hyde immerging from his dark cabinet, second time around I sat waiting for the payoff, for the point, to be told what linked these elements together, and it just wasn't there, indeed Tegan and Adric and for large part the doctor were all a bit superfluous to requirements, whatever those requirements were, and while a character study of Nissa wouldn't have been a bad thing, this really didn't tell us anything new which is a shame, sinse with the Da traders being so very, very unusual it might have done.

Ah well, at least the next one is a real cracker!