Hothouse written by Jonathan Morris and directed by Barnaby Edwards 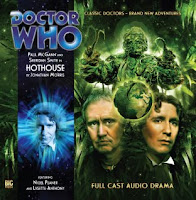 What’s it about: Somewhere in the south of England stands the Hothouse. Five vast, state-of-the-art bio domes, all steel and glass. Inside, rock star turned environmental activist Alex Marlow has a plan to save the world from climate change. By any means necessary... There's something growing inside the Hothouse. Something that could turn back humanity's tide. A voracious alien vegetable called the Krynoid. The Doctor's going to have to stop it. Stop Marlow. Stop Marlow's fanatical acolyte, Lucie Miller…

Breathless Romantic: I was very pleased to see that the Doctor’s long-term memory regarding Lucie is still on the wonk – so often with these things the long-term side effects of adventures like Orbis are brushed under the carpet. Just a mention is worth its weight in gold because this series has consequences. He likes finding out other people’s secrets. Sometimes he wonders what he ever saw in the human race. Has no respect for fashion considering he ruined Lucie’s best suit! The Doctor is really slow in figuring out that Miss Bright is working for Marlowe, her reaction to the state of the immigrants makes her allegiances obvious. He’s been away for a long time and now when he sees the human race he sees only a race hell bent on its own extinction, a species that doesn’t realise how lucky it is and doesn’t deserve to survive. Wowza, his time away really has changed his outlook on things! One thing he had definitely forgotten was that the human race never gives up. How brilliant is that last scene where the Doctor has absolutely no idea how much he is hurting Lucie by offering to take her home – he is completely out of touch with his humanity which is probably how it should always have been. And he’s forgotten how to drive!

Luscious Lucie: Lucie Miller, fascistic demonstrator? She has joined the LON and is prepared to fight (and even kill) to save life on this planet! Super spy at work, Lucie is working undercover to discovers what is happening behind the scenes. She wonders why everybody has a brilliant excuse for why it isn’t their fault. She liked travelling in the TARDIS and has to ask him that she wants to come!

Standout Performance: Adna Sablyich salvages a great deal from Miss Bright’s empty characterisation (she was so daft she didn’t realise what Marlowe was up to even though she did know all about the Krynoid cuttings going missing?) with her hysterical, emotive turn as she becomes a Krynoid. If ever there was a school of performance for transforming into an alien menace by scaring your audience, Sablyich could easily take a workshop!

Sparkling Dialogue: ‘KILL ME!’
‘Humanity needs to be pruned back to a sustainable level!’ ‘You make genocide sound like horticulture!’
‘Are you surprised you can’t kill a living jungle with bullets?’

Great Ideas: Alex Marlowe the pop star building his own Eden conservation project, the League of Nature. As the Doctor says so succinctly the human race does have an amazing capacity for self-denial, never taking responsibility for our actions and never thinking beyond the moment or our own petty concerns. Sir Colin Thackery (The Seeds of Doom) recommended the Doctor and as such the World Ecology Bureau were able to borrow UNITs space-time telegraph and contact the Doctor. After the Chase incident Sir Colin ordered cuttings to be taken from the Krynoid remains to find new ways to kill them. There was a break in and the cuttings were removed and now Marlowe is cultivating new Krynoids. Illegal immigrants smuggled in from the Eurozone and delivered to Marlowe’s property. The immigrants are kept in cages, stung by the Krynoid seedling and observed as the infection spreads and metamorphoses. Marlowe wants to snip back humanity’s out of control population to 100 million right thinking individuals! I really enjoyed Christina’s morally bankrupt view of the world: its not her responsibility because she is only doing here job – when you’re struggling to stay alive you don’t think about whether what you’re doing it right or wrong, you just do what you have to do.

Audio Landscape: News broadcast, motorcycle, protestors, police sirens, exotic fauna, jungle creatures chirping and twittering, the piteous cries of the immigrants, squelching Krynoid pods, we enter Miss Bright’s head as she hears the thoughts of the rainforest mixed in with her beating heart, ‘shoot to kill!’, rustling plants pressing against the glass, cracking it, Christina is brutally sawed to death, the shivering jungle coming alive, the frightening fully formed Krynoid voice, I wonder if Big Finish have a file full of big explosions because they are a masters at ending with a bang.

Musical Cues: Even the music taps into Dudley Simpson’s love of melodramatic percussion instruments with some particularly atmospheric drums rumbling as Lucie is rumbled by Marlowe.

Isn’t it Odd: Lucie’s ‘You mentalist! You environmentalist!’ made me want to hide away for a day and pretend that I wasn’t a Doctor Who fan. I was really disappointed to see that a cliffhanger from The Seeds of Doom was lifted wholesale and dumped in the middle of this story. It’s never quite as good the second time round. As soon as Miss Bright’s usefulness as a decoy is over, she’s the next victim; she’s that vacuous a character. Giving nature the ability to fight itself – Marlowe is merely a cut price Chase but without any of the camp scares. Even Christina’s death is a lousy imitation of the chilling grinder from Seeds, in an attempt to mimic that stories horrific tone.

Standout Scene: There is a scene that demonstrates the horror of the Krynoids perfectly as the Doctor talks to a Polish teacher who has been infected and he begs for death before it is too late but the Doctor cannot put him out of his misery and it turns homicidal…

Notes: When asking for iced tea, the Doctor asks for lemon stating ‘lemons are good.’ Which is the first and last time I want to see a touch of New Series nonsense in this series thank you very much! Just a random observation but the best stories in the Eighth Doctor Adventures as far as I am concerned are the original ones such as Max Warp, Grand Theft Cosmos and Orbis – this series is strong enough now that it doesn’t have to trawl through old Doctor Who stories developing sequels to bring the punters in. The Morbius two parter sucked like a rotten toothache and this story whilst quirky is little more than a rehash of The Seeds of Doom. Writers such as Nick Briggs and Jonny Morris are worth much more than this plundering of past glories.

Result: An eccentric millionaire obtains a Krynoid pod by covert means in a country house and cultivates the creature to scale down humanity but the creature grows to its full size and takes control. No I haven’t been watching The Seeds of Doom but you might be forgiven for thinking that I have. It pains me to see a writer with Jonathan Morris’ undeniable imagination reduced to rehashing old Hinchcliffe stories – I thought we had enough of that when a similar sort of homage/sequel/rip off was fudged at the end of the last season. Its not all bad, Morris does make some succinct points about the exploitative nature of humanity and Barnaby Edwards’ direction is as atmospheric as ever and the various sound effects used to convey the Krynoids is genuinely spine tingling in places. But this is a story that most fans have already seen and enjoyed and I’m not someone who enjoys the return of an old monster/villain just because which has dominated the last five episodes of the 8DAs. Entertaining but pointless: 5/10 (the lowest score I have ever given a Morris penned story – don’t let it happen again!).

Buy it from Big Finish here: http://www.bigfinish.com/32-Doctor-Who-Hothouse
Posted by Doc Oho at 11:28

ny favorite line was "oh lucie miller HOW could i ever forgotten you!"

i almost high fived myself

I was excited at the prospect of the return of the krynoids, but, as you say, this is just a rehash of a much more enjoyable story.