Resistance written by Steve Lyons and directed by Lisa Bowerman 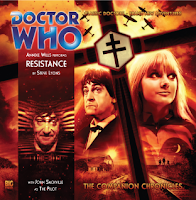 What’s it about: February 1944: France is occupied by the Third Reich, the French Gestapo has an iron grip and the native resistance attempts to overthrow the invaders. On one quiet winter's night, a British plane crashes to the ground, leaving a flying officer desperate to escape via the evasion lines. Separated from the TARDIS, Ben and Jamie, the Doctor and Polly find themselves with enemies on all sides. Trapped in one of the darkest times in history, Polly discovers that humanity can be just as dangerous as any threat from outer space. She resolves to make a difference - even if it means leaving the Doctor forever…

Long Lashes: What is Polly’s role? That’s a lovely place for Steve Lyons to start and explore her place within the TARDIS team. She tried her best to be useful and was happy to make the tea and mop the brows of the wounded but sometimes she wonders if she had ever made a difference. They always loved stepping into a new world but it could be a bit scary. Polly lost somebody during the Second World War, her Uncle Randolph. When she mentions that its so recent you have to remember suddenly that the opening years of Doctor Who were just two decades after the terrifying events of 1939-45. The horrors that Polly has seen, the nightmares she has lived through are so far beyond her scope that she had no defence. This time it wasn’t fighting monsters, this was her world and she had never been more scared. Polly knew what the future held for her Uncle and found it cruel that she had to be and watch it all unfold. She takes real umbrage to the Doctor’s suggestion that her Uncle might be a traitor. It’s lovely that Polly hears Ben’s voice in her mind when she needs some advice. Even though she knows it is wrong to do so Polly sticks to her Uncle and vows to find a way to change his fate. Polly doesn’t tell the Doctor her plans because she knows he will enforce that she cannot save him and spare her father the pain of losing his brother and that was the last thing she wanted to hear. Polly expected to feel different, like her childhood memories had been rewritten and her Uncle would now be a part of her life now he was saved. Polly has four brothers, one older and three younger. Had she not been there, had she never boarded the train then the spy would never have been exposed. She had down the right and she had made a difference. That was all she needed.

Oh My Giddy Aunt: Take of and never find out where they are – outrageous! I really liked the assertion that for all his impishness and slyness the Doctor is in fact very strong, physically manhandling Polly into a gorse bush when she is in danger. He has a brilliant mind but sometimes he needs help with the more practical side of things. In a very sweet scene the Doctor thanks Polly for being there when he most needed her, for making him the man he is today. He lets her know that he thinks she is extraordinarily resourceful and compassionate woman and that one day she will work out what it is she is supposed to do with her life and she will do it magnificently. He doesn’t want her to change the past, but change the future.

Able Seaman: Because of the closeness between the characters on screen it seems right somehow to have Anneke Wills putting on a cockney accent and bringing Ben to life. All false bravado and loyalty to his friends, its easy to like Ben Jackson.

Sparkling Dialogue: ‘That’s the worst thing about this war. The way it tears families apart.’
‘There is no place for us now in my country.’

Great Ideas: The TARDIS had a knack in this period of materialising in awkward spots – in the path of a plane coming into land and now on a train line. I loved the Doctor’s assertion that that train would not smash the TARDIS to bits, more likely the other way around. It’s a lovely fresh way of telling a companion chronicle with two voices telling separate threads of the tale, one a companion that we know well and the other a stranger but whose adventures take on greater meaning as we realise this character means a lot to Polly. Suggesting the desperate measures people had to go to to appease the Nazi’s Jacqueline talks about turning herself in and killing herself to save her parents from the occupying force. In a great twist it transpires that the Pilot isn’t her Uncle after all but a Gestapo Officer who has taken on his identity to infiltrate and expose the resistance. Polly manages to expose him when he fails to name the correct family members. Jacqueline’s real name is Michelle – Michelle of the Resistance!

Audio Landscape: Aeroplanes gliding through the air, bullets clacking, propellers grinding around, the calmness of the air as the soldier parachutes to safety, foxes screaming, crunching in the gravel, booted footsteps, the screeching of the barn door, dropping a knife, hens pecking, escaping in a tatty old tractor, the train whistling and chugging away from the platform, there is a great shock moment when there is shot and Polly’s scream melts into the shrill whistle of the train.

Musical Cues: A minimalist score with moments of discordant piano, perfectly in tune with the uncomfortable atmosphere of the writing. Robertson writes in a cheeky little sting every time the Doctor starts improvising.

Standout Scene: The cliffhanger is inevitable, as soon as Polly mentions her Uncle lost in the war it is clear who the second storyline belongs to but that doesn’t stop this being a shock moment for Polly and leaving the audience wondering if she will try and save him in the second episode. Her decision to jump on the train is a character-defining scene and the confrontation between Polly and the Pilot is superbly directed.

Result: Steve Lyons always likes to subvert your expectations; he wrote a gripping historical for the dizzyingly camp season 24 and here he whips up a stifling historical for the monster laden Troughton era. It makes the most refreshing change of pace and shows how this sort of Hartnellesque drama could have worked a treat had they continued. It a coming of age story for Polly and takes us through a whirlwind of emotions with her, from trying to figure just what it is that she is good at in their adventuring to the aching need to save her Uncle who died during the war. She has never been so prominent or as interesting before and Anneke Wills imbues the philosophical material with some real emotion. It’s a dark piece and brilliantly structured, the first episode setting up the dilemmas and twists of the second and deserves a relisten when the revelations come to light. A strong character drama: 8/10

Buy it from Big Finish here: http://www.bigfinish.com/39-Doctor-Who-The-Companion-Chronicles-Resistance
Posted by Doc Oho at 01:26

Just finished listening to this tale just over an hour ago (my word it's hard to fall asleep when a story is good!)

It's one of those tales that, arguably, probably couldn't be told in 1960s (and if it was, it probably would've been erased by the idiots at the BBC). I did find Ms Wills quite enjoyable to listen to.

The only thing that bugged me about it was actually the 'extras' where half the people talking sounded as if they were in different rooms.

An underrated Tardis team, I've thoroughly enjoyed the Companion Chronicles that Polly has narrated. Just wish there were more of them.

Something that I'd never really considered before, that if she was early 20's in 1966, then OF COURSE she would have had family members involved in the War.

I had little memory of this one before my relisten, and honestly I was surprised how good it was. I've got something of second world war fatigue as far as Doctor Who goes, indeed it sometimes feels like the Nazis are becoming the Daleks! :D.

And yet,the atmosphere, the questions it asks, the dilemmas are all just so well put together.
I will confess I've never really been a fan of Ben and Polly as companions. I've got nothing against them, but when you already have Jamy to provide the bluntness factor Ben seems a bit superfluous, and other than being female and pretty and waring trendy fashions Polly really didn't have much to distinguish her (she seems far more a dollybird than any of the third doctor's companions especially compared to the likes of Zoe), I honestly wasn't sure about them. The one exception is Power of the Daleks, sinse Ben really got to play the streight man and Polly to use her brain and rationalize things, and had they related worse to the situation of the dignified old first doctor changing into a younger, scruffier and more eratic version odds are the regeneration would never have worked.

Interestingly enough though part of the reason I liked this story is for the very fact that Steve Leons, The Doctor and Eeven Polly herself question her own lack of distinction, and Polly goes about asserting herself and asking what difference she really makes, and does so in a far less winy and more vital and integral way to the story than any of Clara's self satisfied scoldings of the Twelth Doctor ever could.

I also love the way that the second Doctor actually notes that she was there when he needed her most and made him the man he was, and I'm pretty sure that relates to her actions in Power of the Daleks.

So, all in all a great thumbs up from me. I actually wish this one had been a bit longer, and that Ben at least got something more to do, though on the other hand it's so unusual for Polly to be the focus and actually did succeed at giving me a far better idea of who this girl is than I ever had before, I suppose there really wasn't as much time to ask the same questions of Ben.

Either way, another smasher for the companion chronicles, they definitely seem in gear now and rolling well if my memories of the Mahogony murders and the Magician's oath are to be believed.