The Book of Kells written and directed by Barnaby Edwards 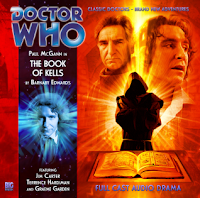 What’s it about: 'Anyone who's prepared to kill for a book interests me.’ Ireland, 1006. Strange things have been happening at the isolated Abbey of Kells: disembodied voices, unexplained disappearances, sudden death. The monks whisper of imps and demons. Could the Lord of the Dead himself be stalking these hallowed cloisters? The Doctor and his companion find themselves in the midst of a medieval mystery. At its heart is a book: perhaps the most important book in the world. The Great Gospel of Columkille. The Liber Columbae.

Breathless Romantic: The Doctor seems to enjoy the role of Tamsin’s educator in history, figuring out their location in a dark room. A visiting bibliophile? The Doctor is worried about time eddies and Vortisaurs coming to Ireland through the vortex he was dragged through. He admits he has been monumentally stupid when he discovers the hidden Time Scoop and realises just who is meddling with time. Their paths have crossed before now and after now – in fact they are due to meet up in about 60 years time on the coast of Northumbria. I love how the Doctor continually corrects Tamsin on her language faux pas. How funny is it that the Doctor completely fudges the identity of the Monk and goes off on a rant about their history together to Brother Bernard and declares ‘That’s right! I am the Doctor!’ to which he gets a very unimpressed ‘who?’ Dear oh dear clearly the old fella is too used to the anagramical and obvious disguises of the Master…the Monk is a little too clever by half. Who else could ruin the Monk’s plans just at the moment of fruition! The Monk likes the Doctor’s wild hair, it suits him.

Tasty Tamsin: So much for his famous leisure world that the Doctor promises her…instead she gets covered in chalk and falls in shit! She reversed into something on her fourth driving test, possibly her fifth. Tamsin has a thingy on her whatsit! The Doctor suggests no one could be as stupid as Tamsin…joke! Unfortunately his latest assistant is not very adept in the art of subterfuge and when panicked by the arrival of people they need to be hiding from she knocks things over, gets herself dirty and generally makes a lot of noise! Olaf thinks that Tamsin, covered in chalk, is a ghost! During their stealthy pursue of him she falls in a dung hole and she can feel the Doctor’s smirk from a distance. Her Macbeth quote leaves plenty to be desired and she always-hated improvisation and proves it to by claiming to be Sister Mary from Salzburg! The book of Kells is just about the most beautiful thing that Tamsin has ever seen. She always hated sardines ever since Darren Green thought it was the perfect opportunity to show her his…and we never get to hear the end of that story! Thinks that the Doctor isn’t very gallant and that he should rush after Lucianus – Paul McGann and Niky Wardley are working together very well already. When she said she hated him earlier, she didn’t mean it – especially after he stops her from getting dismembered. Tamsin switches the pages and fools the Monk into materialising without the circuit – when all the posturing is done between the Time Lords it is the Doctor’s freshman who outthinks everybody.

Standout Performance: Graeme Garden is instantly something a bit special, charismatic and with a voice on audio to die for. I’m very pleased that the Monk is brought to life by another comic genius, walking that fine line between comedy and drama. I found his delight at discovering who the Doctor was charming, even though it means his schemes might come to an end.

Sparkling Dialogue: ‘The next thing I know I wake up in here with a deranged man talking about Egyptian volcanoes and people with two hearts!’
‘I see you’re calibre of companion hasn’t improved. Still travelling with the intellectually challenged…’
‘Goodbye Lucianus…and hello Lucie Miller!’

Great Ideas: Ooh who else wants to visit the legendary loquacious falls of Carisima Maxima? Someone is fishing in the time stream and has hooked them in like an expert angler. The stick the Doctor pulls Tamsin out of her dung hole is a bone. The unveiling of the Book of Kells, the great gospel is a powerful symbol of Irishness and even though it was not created there but that’s where it was created and it represents the soul of Ireland. A rudimentary time scoop made with the dematerialisation circuit of a mark four TARDIS. ‘Stonehenge, Leonardo Da Vinci, the Norman Conquests and now the Book of Kells…you just can’t leave history alone can you Thelonius?’ The Monk’s plan was to set up shop here and repair his TARDIS and in the meantime cobble together a Time Scoop to lure other time craft here to cannibalise.

Audio Landscape: Opens with a lovely taste if monks chanting, squeaky door, there’s a very painful scream that bleeds into the title music, the TARDIS sounds drunk, smoke hissing as the Doctor opens the door, the Doctor tips the bucket over, Tamsin’s awful phone ring tone, a horse galloping, an owl hooting, the sliding stone of a secret passageway, the Monk’s TARDIS goes kaboom with spectacular fireworks, the fizzing console.

Standout Scene: Tamsin falling fifty feet down a stone chute and landing softly, revealing a secret passage is a wonderful moment of audio comedy. Technically this story features the first rumpus between Tamsin and Lucie and she manages to overpower Lucie with her scrum half from the school rugger team. Their fights will get more and more dramatic as the season progresses.

Notes: I am such a numpty! I had no idea that Lucie was going to turn up in this story and in retrospect just listening to the first scene tells you everything you need to know! That is clearly Lucie’s accent and the character is called Lucianus! It’s hilarious how obvious it all is now but I was completely hoodwinked!

Result: Barnaby Edwards writes a terrifically entertaining historical exploit with lots of witty material for the four main characters. It is great fun having the Doctor, the Abbot, Tamsin and Lucianus all trying to out each other as imposters – this is precisely how The Mark of the Rani should have played out, having some fun with all these time travellers turning up in history. The Book of Kells is not the most famous historical document which makes this an educational journey and I really enjoyed how Edwards weaved these events of his story into history as it is documented. It’s a clear indicator of how the season is going to progress but makes for a delicious slice of pleasure in its own right. Make sure you listen to this story twice because once you have enjoyed the surprises a re-listen makes this a whole new experience: 8/10
Posted by Doc Oho at 10:39

Oh, this was definitely a great audio. And I've heard all of this season already, and knowing what I know... Listening to this story knowing how it all ends between the Monk and Eight just gives me the shivers now. I'm looking forward to your take on the incredibly powerful series finale Lucy Miller/To The Death. I swear, I wept for 15 minutes straight once it was over. Even on the second listen.

We really enjoyed The Book of Kells . The Doctor sparring with another Time Lord is always a real bonus and this story had plenty of tension and kept us engaged from beginning to end.

Sorry, but The Book of Kells is and was awful

So, the Doctor and Tamsin arrive in 1006, near to a monastery, there are Vikings nearby, there's anachronistic technology, and the villain is....The Monk! It's just a vastly inferior retread of The Time Meddler.

With one key exception. In The Time Meddler, Peter Butterworth was playing a character who used the monastery as a base for his plans to change history. He disguised himself as a monk in order to attain his goal. He was not actually called 'The Monk'. There were other touches like the forgetful First Doctor guessing that Butterworth left Gallifrey 50 years after he did. The two characters worked really well against each other, and at the time The Time Meddler ended, Butterworth's real identity was still a mystery.

However, in The Books of Kells, the Doctor confidently states that Garden left 50 years after he did, and the enigmatic character who had disguised himself as a monk to alter history is now actually called "The Monk"!!!! Rather than the crafty wolf in sheep's clothing, we have a dolt who has been trapped in this period. And why would this character now actually call himself 'The Monk'? It makes no sense whatsoever.

In short, The Book of Kells was written by someone who watched The Time Meddler, and tried to recreate it, without actually understanding what made the original work so well, and also completely failing to understand the fundamentals of the characters in The Time Meddler.

Whoever Graeme Garden's uninspired one-dimensional "Monk" is, one thing is for sure. It's not possibly the same Time Lord that Peter Butterworth played so well in the William Hartnell Era.