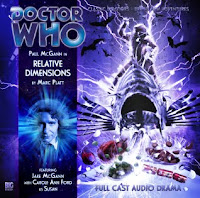 What’s it about: Christmas is a time for family, they say – which is why the Doctor has invited his grand-daughter Susan, and great-grandson Alex for Christmas dinner in his time and space machine. But who, or what, is the spectre at their yuletide feast? Venturing deep into the dark heart of the TARDIS, Susan uncovers her past, Alex is told his future – and the Doctor finds himself caught in a deadly dangerous present!

Breathless Romantic: There’s something magical about the Doctor wanting a family Christmas after all the turmoil of late and trying desperately to make it as normal as possible for everybody despite the odds with his mad lifestyle! Finds trying to negotiate the Christmas shoppers the equivalent of going into purgatory. He has lots to make up to Lucie after their last Christmas together so he promises no alien invasions, no windswept monasteries and definitely no hit and runs or flat lining. Moving doors – other people hoover! The Doctor doesn’t really know how to relate to Alex and doesn’t know what to buy him (it does make me wonder if the Doctor has a difficulty in getting on with boys – he had similar trouble to relating to Adric, Turlough and C’rizz). Couldn’t he always pilot the TARDIS? Even he knows that one is a fib. The TARDIS goes on and on…just like the Doctor! He hasn’t changed; he’s still as irresponsible as ever! The thought of the Doctor giving Susan her old room back as a present is an incredible gesture and proves that he is sweetest guy but also the most thoughtless – how could this present not bring back a torrent of amazing memories for her? Selfishly I think he was hoping that she would see it and throw herself into his arms and ask to travel with him again. Its not that he missed her so much that he turned her room into a shrine but he did put into storage on the TARDISes holding ring when she left just in case she ever came back. The Doctor selfishly asks Alex to join him in the TARDIS, wanting to show him the wonders of the universe without all the boring Gallifreyan education. There isn’t much that is permanent in his life so he kept his companions rooms as a reminder.

Luscious Lucie: Where’s the best place to do Christmas shopping? According to Lucie it is the January sales! Killer bargains galore! She deserves the perfect Christmas. There are wonderful scenes between the Doctor and Lucie putting up the Christmas decorations that quickly remind you that these two are made for each (‘Once the star is on top of the tree Christmas has begun!). Her family Christmas sounds rambunctious! She’s from 20th Century Blackpool – is that alien enough for you? You can imagine (whilst ducking fists) that Lucie is a great mediator back home in the Miller family Christmases because she steps in as soon as the Doctor, Alex and Susan start sniping at each other and orders them to ‘Open your presents or doze in front of the Time/Space Visualiser or whatever it is Time Lords do!’ And then she has an argument with the oven as the meat hasn’t cooked! Susan thanks Lucie for looking after him for so long. Lucie knows he is a plonker but of course she still loves him. Lucie wants to go and see the world with Alex; Rome, Paris, Florence – she always wanted to and now she has somebody to go with her, someone to share it with her. She’s spent so long away from home and she wants to explore her own back yard. Lucie can barely hold back the tears and tells the Doctor that she loves him as he heads off.

Simply Susan: They haven’t had a proper family Christmas since David left. She gets to see the same Doctor as last time, a bit of a novelty! Of course she misses their life travelling together but giving it up wasn’t exactly her choice. Wowza Susan has a total spaz out at her Grandfather when she realises that he has broken his promise and dematerialised the TARDIS, she’s quite a shrew when she’s in a bad mood these days! She wished the Doctor hadn’t given her her old room as a present because she didn’t need reminding and once it is all wrecked she is devastated (losing Alydon’s cloak given to her on Skaro). The places he used to take her.

Angelic Alex: Doesn’t know what to call the Doctor, its hard to label him when he’s family. Buildings are rooted in the Earth; Susan has had to accept that Alex is all too human, not telepathic or regenerative – just like his father. Susan doesn’t want Alex to go off in the TARDIS, they are still rebuilding the Earth after the Daleks nearly wiped it out and he has his own dreams at being a part of that. If the Doctor dies he wants the TARDIS to be Alex’s inheritance, it’s his birthright. One day the TARDIS will be his and he will have to travel with him first.

Standout Performance: I often praise the guest stars and companions (barely an eighth Doctor story goes by when I’m not singing Sheridan Smith’s praises and quite rightly so!) but I have just noticed I rarely compliment the most consistent performer in this range. Paul McGann gives possibly his finest performance yet as the eighth Doctor and its not giving big juicy speeches or facing up to armies of Daleks but simply trying to bring his family together at Christmas. He is an extremely personable Doctor and his charm and silky voices stories over Christmas dinner are simply divine. Given all of his ups and downs recently (and to come) it is wonderful to have the chance to relax with the Doctor and McGann plays his relationship with the three other performers in very different ways, a best friend, a naughty Grandfather and a nervous Great Grandfather. It helps that Marc Platt characterises him with a nostalgic touch that draws you to him (even when he misjudges situations) but McGann allows you closer to the Doctor’s feelings than ever before and its magical.

Sparkling Dialogue: ‘A perfect Christmas. What could possibly go wrong?’ Someone has to ask that, don’t they?
‘Eight foot from jaws to tail, fearsome spines and quills!’ – Paul McGann makes that line sound like poetry!
‘Everywhere you turn its always Daleks smashing things up!’

Great Ideas: Marc Platt seems the perfect choice to write a Christmas episode, his stories are always rich and fruity with an air of importance and often capture the crackling fire (Ghost Light), snowy wastes (Frozen Time, Frostfire) feel of a good Christmas. With Relative Dimensions he gets to throw off the shackles of literate storytelling and gets to enjoy the spirit of a good family Christmas. Echoes of the Doctor screaming from the future trying to spoil his Christmas. The planet Ambrosia where everything smelt of spice…umm. The Flaydashrews swarm as the Doctor from the future appears wearing an insulation suit fighting with the fish. The fish is leaping about in space and time, destabilising the TARDISes integrity. They can’t change its future because it has already escaped (since it is with them already). Also known as a Ressurection fish due to long periods of hibernation, capable of producing powerful electric shocks, used for hunting and self-defence.

Audio Landscape: Barnaby Edwards is one of the unsung heroes of Doctor Who and he has directed some of my all time favourite stories. He sprinkles a touch of magic over this piece and really imbues it with the spirit of Christmas. Beep, beep go the cash registers, cash jangles in the draw, bicycle bells ringing, trolleys clanking, girls crying ‘Happy New Year!’, the Flaydashrews squeaking, a bubbling screeching scream, hover cars zooming by, missing the bus, rain hitting the TARDIS exterior, lovely bubbling vegetables in the galley, Lucie madly stirring her gravy, pouring wine, everybody scraping at their plates as they tuck into their dinner, the TARDIS losing power during a vital point in the Doctor’s story, the taptaptap of the fishes quills as it advances – it sounds incredible as it circles Alex and Lucie, Susan’s room dripping with water, smashes glass, the telepathic contact between the Doctor and Susan, throwing snowballs and running around in the crunchy snow.

Musical Cues: A huge burst of Christmas cheer opening the episodes on exactly the right foot! The choral theme laced through the present opening scene is gorgeous. As the Doctor has a plan and ropes Alex in the uplifting sweep of music suggests they would make a great team.

Isn’t it Odd: The one thing that really jarred was Susan goes from bellowing and condemning the Doctor in one and then on the very next track she’s telling him how incredible and wonderful and making a toast to him! But then she always did used to go off like an emotional firework!

Standout Scene: The Christmas dinner scene is a very special moment in the Doctor’s life, where he keeps his family enraptured with his story about the first Christmas. Given that I have already listened to the season this scene has eve more poignancy, the Doctor surrounded by his favourite people and them all enjoying each other’s company and a good meal. I think it will be a long time until we see him quite this content again. I loved the scene where they found the ring of rooms of all the old Doctor’s companions’ rooms – what a poignant idea that the Doctor keeps all of their rooms together to remember them by. I can imagine him during the quieter moments in his life walking along the holding ring and spending time in each room, remembering that person who travelled with him.

Notes: ‘We all take our lives in our hands just meeting you!’ Oh Lucie, how little you know. Never let it be said that Big Finish wont market their own merchandise within their own stories – the fish that is attacking them was bought for Susan on the planet Quinnis which just so happens to be the most recent Companion Chronicle starring Carole Ann Ford! Rather than being an annoying marketing ploy it actually enhances both stories. Lucie heads off travelling with Alex and we pick up their adventures in Lucie Miller where everything is not quite as smooth sailing as she would have liked.

Result: Get the duvet out, light some candles and settle down for a heart-warming Christmas with the Doctor’s family. Marc Platt deserves kudos for tackling what could have been a potentially horrific slice of soap opera and making it something special that develops its characters and creates a stirring emotional atmosphere. Relative Dimensions is the perfect Christmas treat, a slap up dinner, lots of presents, bickering, tall tales and real sense of family. Oh and a giant pan dimensional space fish as well. The music is very emotive throughout and there are some well-chosen carols to accompany scenes of family fun. A wonderful story and another gem in what is definitely proving to be the most consistently jewel laden season for the EDAs. What I will really remember this story for though is bringing Susan home and reminding us why we love the Doctor so much. Well done, Mr Platt: 9/10
Posted by Doc Oho at 09:36