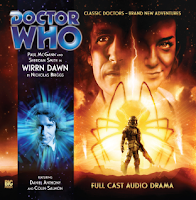 What’s it about: “This is full scale war. Wirrn and Humankind locked in a deadly struggle for survival. When did that happen?” The Doctor and Lucie land right in the middle of one of the human race’s bloodiest periods of history. Trying to make a difference here would be like standing up and calling for a cease-fire on the Somme. Certain death… Or Worse. Survival can be a messy business.

Breathless Romantic: Since when did medics have pilot’s licences? The Doctor has never been better than when he has to make spare of the moment decisions and juggling a hundred problems at once. Wirrn Dawn sees him at his improvising best. He wont condemn the Wirrn for their natural processes, life takes many forms and they learn much from eating their way through their host bodies. The Doctor calms Farrol down as the metamorphosis begins in a touching moment. The old Wirrn Queen recognises the Doctor as a wise one.

Luscious Lucie: Normally Lucie is far more reserved and polite, yeah right! She knows her way around a spacesuit now, quite the seasoned time traveller. She’s a gibbering wreck when she is left floating in space, cannot see the Doctor or the TARDIS. She knew a ten-foot centipede once and he turned out to be good bloke. Lucie has seen a lot of scared people in her time with the Doctor and she knows there is nothing wrong with being scared as long as you keep a lid on it and stay in control. Not that it’s any of his business but it’s not like that with the Doctor, they trust each other in a way she has never trusted anyone before. Lucie stands up for the gestating Wirrn Queen inside Farrol and as such they save their lives.

Standout Performance: Oh my gosh it was only at the end of the story that I realised that DeLong was our very own Clyde Langer, Daniel Anthony! What a young voice he has! Beth Chalmers once again gets to have fun playing a role no other show could offer as the silky voiced Wirrn Queen.

Great Ideas: I love that this story doesn’t even bother with all the usual recriminations but instead shoves the Doctor and Lucie right in the thick of the action as the Wirrn attack within the first five minutes. Lucie is appalled by the fight going on from her vantage point in space, ships blowing up, people falling out into space and being carved up by the Wirrn. The Galsec colonists forging out into space and there are many battles for survival. InDigs – indigenous populace. Wirrn use other life forms as gestation hosts, a pattern repeated all over the universe. Every season the InDigs would sacrifice one of their own to the Wirrn on the altar. Can the human race overcome their hatred of the Wirrn and allow them to live side by side? By DeLong’s trigger finger happiness I doubt it…

Audio Landscape: Chirruping moving from ear to ear, impressive intercom, alarm, guns firing, breach in the hull, ‘abandon ship’, firing on the Wirrn and its hideous screeching, depressurising the section, flying out into space as the spacesuit jetpack propels Lucie, a soldier screaming mayday as he killed by the Wirrn, chunks of spaceship entering orbit and crashing into the planet, ripping the seat padding off, electrifying the hull, impressive warfare scenes with plenty of screaming and gunfire, tearing off Farrol’s bandage, the Wirrn bursting free of a corpse, the TARDIS shoots off through space as the Wirrn swarm crowd your ears.

Musical Cues: Wow, the music is instantly effective and dramatic. You’ve got punchy, sensational percussion music for the action sequences and beautiful, almost poetic melodies for the thoughtful moments. That man Robertson is really good.

Standout Scene: You realise with some horror that the bug that attacked Farrol laid an egg in her and its slowly getting a grip on her mind.

Notes: Salway warns Lucie she is heading for a fall for putting the Doctor on such a pedestal and admitting that she trusts him so much. How right he is. Everyone lets you down sooner or later. One of my favourite covers for the range, I love the lighting on the Doctor and Lucie’s faces.

Result: I didn’t need to look at the sleeve to see that Jamie Robertson was responsible the sound designer and music, I could tell by the end of the first track so effective was the audio experience. A story that is practically told in real time and has a relentless pace, Wirrn Dawn is a gripping action feast. Some people might find this quite serious and po faced but in a range that has gone for laughs far more than scares of late it is a welcome reminder of how violent and nasty an audio experience can be. Spaceships are destroyed, insects slice up bodies, guns fire, bloody wounds are gouged, creatures are electrified, people beg to be killed…this story is like a nasty piece of grit between your teeth. Big macho dialogue and some real scares, this is an attention-grabbing stab in the gut with some impressive set pieces and a poignant ending: 8/10
Posted by Doc Oho at 12:55

I finally had the opportunity to listen to this one earlier today, and so I decided to take a look at your blog for your thoughts on it, since you write such insightful, intelligent, witty commentary.

I really enjoyed this one because Nicholas Briggs so successfully retained all of the horror & menace of the Wirrn while still showing them in a somewhat sympathetic light. I've always thought the end of "The Ark in Space" was a little sad because the Wirrn got blown up. I felt that once they were off the Ark and on that spaceship hurtling away from Earth, that meant humanity was no longer in danger, so it wasn't really necessary for Robert Holmes to destroy them.

Here is a link to my own review...