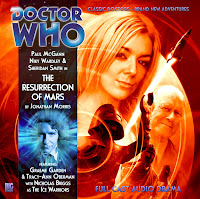 What’s it about: Deimos, moon of Mars – where Lord Slaadek's plans to revive the ancient Ice Warrior civilisation hang by a thread. Only the Doctor can stop him… but an old enemy, hiding in the catacombs, has an alternative plan. A plan that will test the Doctor's heroism to its limits. Just how far will the Doctor go to prevent the destruction and resurrection of Mars – on a day when his friends become enemies, and his enemies have right on their side?

Breathless Romantic: Is this the first time the eighth Doctor has acknowledged his previous self? It’s a wonderfully revealing moment where he explains that he used to be just like the Monk, a man with a masterplan, seeking out injustices and toppling governments all for the greater good. Evil starts with the ends justifying the means – what if you can save a million lives but ten have to die – but where do you stop and he wound up killing more people than he saved at times? He ended up travelling alone because he couldn’t trust himself anymore and it wasn’t until he got a new body and a fresh slate that from that moment he knew he would never again countenance the death of the single life – he understands how precious it is. Talk about digging for gold in the seventh Doctor’s character, it makes you wonder why any other writer hasn’t tapped this potential before. He hasn’t seen Lucie since Christmas past and he never thought he would see again. The Doctor would never, ever leave Lucie on the Moonbase to die. He doesn’t think he has the right to decide who lives and who dies even if it comes down to billions of lives at stake. When he asks Tamsin if his morality is a problem it actually sounds like he is asking if it is she can get off at the next destination. Does the Doctor change the rules to whatever situation suits him? The Monk says its not that the Doctor is ignorant to the consequences of his actions, its just that he is afraid to face up to them. He has an irritating ability of thwarting the Monks plans at the last minute. What an old ham, the Doctor seems to enjoy hissing it up pretending to be an Ice Warrior! As much of a Gallifreyan flunky as the rest of them, a victim of his own spurious morality! The destruction of Halcyon is one of the greatest tragedies but he cannot prevent it because the consequences for the Web of Time would be catastrophic. When Tamsin says he claims to be a moral crusader but all he cares about is keeping his friends alive you know she isn’t that far from the truth. The Doctor quietly understands why Lucie is undecided on travelling with him but begs for her to let him give her the Christmas he denied her at the beginning of the season.

Tasty Tamsin: It’s the end of the road for Tamsin and the Doctor just as they were starting to enjoy their time together. Rather than having a jarring about turn in her opinion of the Doctor the story spends a great deal of time showing that she had doubts even before the Monk showed her the results of the Doctor’s decision at their worst. By bringing in both the Monk and Lucie we get to see new sides to Tamsin, wide eyed wonder with the former as he shows her the paradise planet Halcyon and bitchy sisterly aggression with the latter as they butt heads over which Time Lord has the right approach. Its great that Tamsin knows her own mind and isn’t afraid to speak it and when she questions the Doctor about what is so special about Lucie when he willingly let Grenville die is a very good point. They would all be safe now if he hadn’t hesitated when he found Lucie was on board and Tamsin wont let him shy away from that fact. If it had been Tamsin on the Moonbase she would have wanted him to press the button and save the lives of thousands of people. Of course she doesn’t want the Doctor to die, she isn’t a monster but if that is the lesser of two evils that is the option she would take. She doesn’t want to travel with the Doctor anymore because he spends too long looking at the bigger picture that he fails to see the smaller consequences of his actions like the deaths of everybody on Halcyon. She wants to travel with someone who is prepared to make a difference for good and whilst I don’t think she will find that with the Monk it is a worthwhile sentiment.

Luscious Lucie: The story opens wonderfully with Lucie being fired by the Monk and having to find her feet on the Moonbase in the middle of a crisis (‘And you can shove your meddling right up the nearest black hole!’). ‘Uh-oh giant lizards approaching!’ – Lucie on the Ice Warriors! What is about the future that they always have to hide the doorknob? She had some professional friction with the Monk (‘Stop this TARDIS right now or you will get this Michelangelo where the sun don’t shine!’). She thought that answering the ad for a traveller in time and space would be just like travelling with the Doctor, righting wrongs and fighting insane computers. When they visited the planet Krestus and the Monk wanted to stop a dictator coming to power by going back in time and killing his parents in an avalanche, Lucie objected strongly because there is no point trying to avoid wars by killing people! Lucie is unsure whether she wants to go travelling again, its still too raw after what she found out about Aunty Pat. She’s such a sucker for Christmas she agrees to have one more adventure with him.

Meddling Monk: What’s interesting is that although the Monk is clearly trying to manipulate Tamsin into leaving with him everything that he shows her is the truth. He does put a dramatic spin on events and only show the worst excesses but you can’t argue with the facts – Halcyon would be decimated if the Doctor fails to act. The Monk admits that he was the one that put the advert for a companion in Situation Vacant – to be fair it is exactly the sort of lunatic scheme he would be involved in to find a friend! He wanted the ability to vet potential candidates. He’s such an old rogue he sends the Doctor and company back down to Deimos with a bump and then turns on the charm on a sixpence when Tamsin walks in the room suggesting he was just getting some provisions together! I would have loved to have listened to a spin with The Monk and Tamsin; I think it would have been a laugh riot! His TARDIS turns into a Punch and Judy booth! He has the courage to improve history, to make it happen. He believes in working for the greater good. Changing history is his main thing, according to Lucie.

Standout Performance: Once again Graeme Garden makes a huge difference to proceedings. He is perfectly charming in the first episode, taking Tamsin on a tour of the Doctor’s mistakes and then turns devilishly funny villain when confronting the Doctor in the second. I especially loved his ‘ooh! Ouch!’ running away from the Ice Warriors because it reminded me hilariously of Troughton’s second Doctor and plus I could just imagine Peter Butterworth doing exactly the same thing.

Sparkling Dialogue: ‘Everyone aboard this rocket is going to die because you had a ‘to be or not to be’ moment and you don’t think that is a problem?’
‘Mars 2, Halcyon Nil.’
‘And I would have got away with it too if it wasn’t for your meddling! Oh no wait…I did!’
‘The destruction of Halcyon is a part of the Web of Time!’ ‘Is it though? I mean really? Or is it something we Time Lords just say to excuse our policy of non-intervention?’ – Best line I have heard in ages! How many times throughout the Charley arc did we hear about the Web of Time – it’s about time somebody said baloney to its stifling rigidness. Yay the Monk!
‘A new dawn rising for Mars…’

Great Ideas: The Doctor was never going to let all those people die – he and Professor Schooner sabotaged the re-ioniser. The Monk takes Tamsin to the planet of Halcyon, a Garden of Eden that smells of paradise. He then pops forward one solar rotation and the atmosphere is poisoned, all their culture and science lost forever. After the Doctor prevents the Ice Warriors returning to Mars they have no choice but to seek a new home on Halcyon. They attack, destroy all life on the planet and make it their new home. There shouldn’t be Ice Warriors in this period of history – the Monk altered the settings on their alarm clocks for an earlier rise.

Audio Landscape: The Ice Warriors breaking through the door with their sonic weapons, I love the burbling hum of the Monk’s TARDIS, rocket thrusters firing dramatically, birdsong and night creatures on Halcyon, shimmerwings, the blistering solar winds on Halcyon one year later, the shuttle being torn to pieces by the re-ioniser,

Musical Cues: There’s a lovely Irish themed jingle on Halcyon. When the Doctor and Lucie reunite Howard Carter brings back memories of their emotional parting with a snatch of the beautiful Deep Midwinter theme.

Isn’t it Odd: There’s so much fantastic stuff going on with the two Time Lords and the two companions that the Ice Warriors get a bit of a bum deal, they were really the catalyst for the sizzling drama.

Standout Scene: The shuttle being destroyed is a real ‘oh shit’ moment because you know it could never have happened without the Doctor’s intervention. Suddenly all the character moments in Deimos between Margaret and Harold make perfect sense because their deaths clutching hold of each other facing the inevitable moment have huge impact on the listener.

Notes: I would have loved to have been able to experience some of the adventures Lucie reels off about her travels with the Monk; meeting bonkers Caligula, then off to see some wispy haired things called Sensorites that weren’t as much of a laugh, then the final of Thordons Got Talent where the singing Slithergee won… The Monk mentions he is going off to meet some old friends of the Doctor to see if they can’t join forces against him…which proves to be the most fatal error of judgement he has ever made.

Result: A blistering conclusion to the events built up in Deimos, The Ressurection of Mars is up there with the best of this season. The first episode is a mini tale in its own right with the Monk taking Tamsin away to show her the consequences of the Doctor’s actions and providing a commentary whilst he makes one of his biggest mistakes in years leading to a tragic, unforgettable cliffhanger. Hard decisions are considered and made and relationships are broken and forged in this impressive drama. The fourth season of eighth Doctor adventures comes to fruition here with all of the elements that have been bubbling under the surface coming to the surface and setting up events for the devastating finale. The moral dilemma that splits the Doctor and Tamsin works so beautifully because they are both right – if he prevented the destruction of Halcyon it could have catastrophic consequences but at the same time he could do something and it could be for the better. A blockbusting mid season spectacular and this conclusion is a riveting thrill ride that has real heart: 9/10
Posted by Doc Oho at 12:47