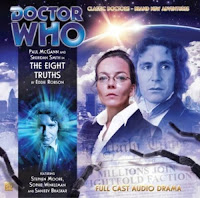 What’s it about: London, 2015. The Doctor’s looking for a lost space probe. Lucie Miller’s feeling just plain lost, on a world she no longer quite belongs to. Perhaps there’s someone who can help. A chance encounter with an old sparring partner leads Lucie to the Eightfold Truth – a bunch of crystal-bearing cranks who reckon a rebel sun is on its way to purge the Earth. As if! But what if they’re right? The apocalypse is upon us. As humankind counts down the last days of its existence, the Doctor races to unmask the Eightfold Truth – and uncovers an old and deadly enemy.

Breathless Romantic: The Doctor half inches Kelly’s book to find out more about the Eightfold Truth! The Doctor has suffered worse than radiation poisoning in his time but on that occasion (I think he’s talking about Androzani) it killed him. Sometimes his people can cheat death if they’re lucky. Better to close your respiratory passages when you sense danger than waste a regeneration. The sequence where the Doctor pops off and does million and one things before returning in the TARDIS at same point in which he walked out of the room is very funny and proves perfectly that he has a time machine! He cannot believe how incredibly stupid the human race is at times – it is a time like this when he wishes he was back on Orbis!

Luscious Lucie: Whilst it is devastating that our Lucie Miller turns away from the Doctor in this story the fact that it is a cult influence and clearly the work of the blue crystals of Metebelies (you didn’t need to spring the twist on me unfortunately…it was obvious!) means the story lacks the emotional wallop it would if it was say Lucie discussing these things with a friend and coming to realise it on her. Because she is clearly being influenced and thus this is not our Lucie…well it felt like same old same old rather than genuine character development. What will Lucie do when she stops travelling with the Doctor? Catching up with Karen gives her a little glimpse of the future if she is dumped by him in the future – possibly not being able to find a job because she has such an obvious gap on her CV. Her aim is to travel around and help people. Lucie doesn’t like it when the Eightfold Truth question her relationship with the Doctor…ultimately she is a pawn in the Doctor’s plan for saving the world and she cannot see the structure of his plane – and with no plan how can they have an impact on the world? In 2015 the BBC Centre has been bought out by the Eightfold Truth and is now their Centre of Balance (they’re probably all in Cardiff). Lucie is manipulated into thinking the Doctor has been manipulating her! The devils! She’s a remarkable girl and the universe wouldn’t be the same without her.

Standout Performance: ‘Can we go back and see the Kennedy assassination?’ – Am I the only person who thought Kelly would have made a great new companion for the eighth Doctor. Sophie Winkleman and Paul McGann share great chemistry and if you follow her progress through this story it actually feels like a companion introduction story for Kelly. With her invaluable contacts, appearances on Newsnight and exposes on outlandish cults, she’s a modern day Sarah Jane!

Sparkling Dialogue: ‘Some of it is frankly ripped off from Buddhist ideas’ – ahem!
‘If this is one of the con tricks of the millennium do you want to be one of the ones who fell for it?’
‘It goes for tens of thousands of quid on ebay!’ – Metebelies crystals being sold on ebay, a sign of the times!

Great Ideas: Contact has still not been made with Britain’s Terra Nova space probe. Karen is no longer working for the Headhunter; she was fired three years ago and dumped back in London. The Eightfold Truth is a life course that helps you to turn your life around. They use energy crystals to relax your mind and help you to be more honest. Telescopes are having trouble viewing the area of space where the prove is and the Doctor is convinced that somebody is messing about with it. The energy crystals they use make people highly suggestible and if you want to read a full exposure on the Eightfold Truth then read ms Westwood (former member)’ book out this Monday! Buddhist groups worldwide have condemned their group and are alarmed that people might associate their faith with the ET. The Headhunter is about and posing as Mary Madbury! A rebel sun that appeared in the sky not long after the Doctor fell unconscious and in the last few months it has been getting closer and closer. It is the same stellar manipulator that was orbiting Orbis and it has been dragged across the universe to Earth. It sucks energy from the sun and stores them in a vast powerhouse. The Eightfold Truth’s member base is in the hundreds of millions. The cult used Kelly to get their prophecy out through an independent source just before it came true – nice to see aliens using the media to manipulate the people!

Audio Landscape: A lovely modern feeling is brewed up with the sound effects – the script pushes the New Series finale angle and there is no doubt that this story has been realised to bring this series bang up to date. Alarm, door knock, radio broadcast, typing, Big Bang ringing, traffic, telephone ringing, crystal vibrating, there’s a wonderfully hypnotic sequence between Lucie and the Headhunter which leads Beth Chalmers tarted up with a phenomenal Metebelies Spider voice, argh spiders crawling all over the cult members – ugh!

Musical Cues: There’s a real attempt to score this story with an orchestral wallop, very Murray Gold, and Martin Johnson gives the story a real punch. Whilst my favourite score of the season is still the quirky musical hall fun of The Scapegoat this is certainly the most exciting. Listen out for the creepy pitter-patter of spider’s legs up your spine at the cliffhanger…brrr! We haven’t had music as bombastic and crowd pleasing as the scenes where the sun changes colour since the appearance of the cylinder in the sky in The One Doctor.

Isn’t it Odd: There are some very dull scenes featuring the Doctor a bunch of vacantly characterised scientists trying to get in touch with the probe which verges on technobabble city.

Standout Scene: The last ten minutes is very exciting as the menace builds and finally releases and the spiders overwhelm the cult members!

Result: Exciting but flawed, The Eight Truths has enough intriguing elements to want me to listen to its conclusion but in trying to emulate a New Series finale it lacks the unique identity that has sparkled throughout this multi-faceted season. The good stuff all comes with the exciting appearance of the stellar manipulator, the introduction of the very fun Kelly Westwood and the return of the Metebelies Spiders who I think have the most wonderful voices. The bad stuff mostly centres around the Doctor and Lucie (sacrilege!) since he is forced into technobabble corner and she is taken over and bled of all her usual warmth and humour. The production is bolstered by a strong atmosphere of growing menace and a stirring musical score and there is a real drive to the direction which ensures even through the duller moments you feel as this is an event. Not quite on par with Robson’s Human Resources but an impressively contemporary slice of traditional Doctor Who: 8/10
Posted by Doc Oho at 09:15