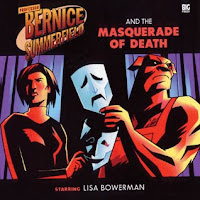 What’s it about: Good evening, Ladies and Gentlemen, and welcome to another in our exciting series of adventures with the witty, irreverent and courageous heroine, Professor Bernice Summerfield. In tonight's story our daring adventuress and her sidekick, Adrian, find themselves imprisoned in a crumbling palace in the Prison Season of Spring, replete with an imperious queen and prissy but rather sweet AI gaoler. How did they arrive? And why doesn't anyone know who the famous Bernice Summerfield is? Before too long there is murder as there always is and Benny is accused. Who might possibly be setting her up for a fall? Could it be The Player a mysterious figure of rhyme and chaos? And why is everybody so obsessed with his plays? Benny may find that her only way out of this prison is to play along with the fiction. But is there someone behind the scenes manipulating her strings? Could she end up a mere ‘costume' in someone's disturbing game of dress-ups? After all her adventures, could this be the final episode?

Archaeological Adventuress: This is the last sort of story you would imagine ripping of Bernice’s mask of smugness and revealing her character bare but within this 65 minute production you will get more of an insight into her character than in several seasons. Read on… Some fascinating comments made about Bernice’s character in the very first scene; an extremely varied character who appears to progress emotionally, suffering traumatic adversities she does not seem to hold onto these experiences with no obvious after effects. She does not seem to age and there is no indication that she has a future beyond the present moment. It is almost as if she were a puppet and only when taken out the box for some new adventure could she possibly have a future. A fictional element that people use to experience adventure through her? Her escapades reveal a person with a variety of personalities and whilst it may appear that she suffers from schizophrenia it is more likely that she is simply not real. There’s a hilarious moment where Bernice is fast forwarding her way through the action and accidentally stops on a moment where she is completely pissed and is babbling away about how much she likes Adrian, how he isn’t her pet and how people might think she is a deviant girl with a fetish! A girl could get used to the idea of getting what ever she wanted. Lady of myriad time and her canine consort! Rather talented at discovering plots, clues and murderers identities! Nobody would do anything as dangerous as putting two Bernice Summerfield’s in the same place at the same time – not even a fictional world could handle that! She’s such a character that she cannot be real. She hasn’t been characterised her, she doesn’t exist within this storybook and thus she isn’t real. The Player will enjoy playing Bernice, the ex lady adventuress, kind hearted and courageous, witty and warm, saviour to many civilisations, wise and experienced in life…but also stupid and insulting, decadent and a drunk, a failiure in love and tricked and bullied by all the men she knew, a false Professor, a shoddy archaeologist and a very bad mother! As Bernice is integrated into the story she feels powerful, in control and wonderful, a tempting place to be but it means the Player has control over her. No doubt she will have many scrapes and adventures to come but no doubt she will survive them.

Mad Mutt: Always the engineer. They come from a season outside of the prison (gasp!). Adrian growls menacing at the Spinster letting his anger rise until she agrees to let him into Summer. Who ever heard of a woman have a dog as a lover? It’s unnatural and completely unrealistic (hohoho)! Its ridiculous, can you imagine sleeping with a dog? He is very important to Bernice and she tells him he is far too good to her considering how she treats him.

Standout Performance: It’s a story of heightened performances that really hit their mark with each character proving quite distinctive. The silky voiced Spinster is brought to life superbly by Joyce Gibbs and the mad Queen drunk on distilled raindrops is frightening realised by Sunny Ormande (who has possibly the best name in any cast list) – channelling Alice in Wonderland’s Queen of Hearts with some style. Robin Sebastian opens the story with exactly the sort of theatrical arrogance that makes you want to punch him on the nose, especially as the Player dissects Benny’s character so accurately and who seems to think he is Kenneth Williams at times (‘sooooo la-a-a-a-ame! Harry Myers gets to play King, shrugging off Adrian’s feral nature. And who could forget Lisa Bowerman – I love her.

Sparkling Dialogue: ‘Once upon a time there was a plucky adventuress called Professor Bernice Summerfield and as always she got herself into a right pickle…’
'Is this possible? Can you just travel back in time via a book?’ – I love that proposition since I am a lover of historical novels, Doctor Who ones or otherwise and have been whipped away from the 21st Century into the Roman Empire, Victorian London, etc and it feels within the book as though you have travelled in time through a window to the past.
‘You speak of people as if they are characters in a story book!’
‘Professor Bernice, how she sneers and she scoffs but she’ll have another thing hit her, With his sudden entrance he’ll knock her socks off and make her sweet victory bitter.’
‘This young hussy has been negating your existence with a few barbed words, has she not?’
‘The condemned can only be executed once. Unfortunately she only has one head!’ ‘Yet she is clearly two faced!’
‘That’s exactly what you are, you witch! A figure of speech! Figuratively speaking!’ – clever, clever dialogue.
‘You can’t have a good climax without some effective shouting!’
‘There are a few plot holes I could arrange for you to sink into!’
‘I will have your skin and when you are erased you will become the unlucky extra in the final episode who gets arbitrarily killed off expedient to all plot and characterisation, meaning nothing!’
‘Nice sound effect!’ – a chandelier crushing Adrian to a bloody pulp!
‘Didn’t you know? My middle name’s Surprise!’

Great Ideas: Benny wakes up in Spring sharing a bed with Adrian and being extremely comfortable with it! A paradise 1000 square feet in total, like a cage, a prison. Last night one of the Queen’s party guests was murdered, the body is completely. Spring raindrops can only be used in the autumn prison. The Spinster records every action and every single speech of those within the prison and at the end of the day it is transcribed to a storybook called the Dailies and as such you can review days within the prison. I love the narrative nerve of this story, travelling back in time via a book, narrating scenes from the past, fast-forwarding the action, defacing characters and taking away their fictional identity. Who has the right to add a character to a scene – the writer! The Queen was erased for ten seconds during the Spinster’s rewrite of the scene. The Spinster is their jailer in the Spring prison but she tries to make them as comfortable as possible. I love the idea of each zone in the prison being a different season with barriers stopping you from crossing one to the other. The Player hops into the narrative with his rhyming verse, providing some witty turns of phrase. The Trial of Bernice Summerfield, sorceress and murderous! The Player takes real people and uses them as his cast, he writes things for them to say and gives them actions, sometimes he puts them on and plays them. The Player is nothing more than a diversion preventing her from waking up. Bernice was found in her room unconscious four days ago and has not roused from her coma since and she was infected by a virus within an artefact, a book. They think it was planted in there deliberately and somebody is trying to kill her.

Audio Landscape: Considering the demands the script places on the Jane Elphinstone she does an incredible job of making the events crystal clear. The tick tock of the clockwork guards, the growing power as she boots up, the party atmosphere of the ball, trumpets sounding, breaking glass, lovely twittering birdsong, crickets, the Queen of Spring runs down like a clockwork woman, the player arrives in an explosive puff of smoke, kissing, the hilarious trial scenes with the jerring and cursing crowd, the tearing away of masks, the flicking pages of a book, Bernice whisks away the crowd with a stage instruction, swordplay, the palace crumbling, trickling water, the squeaky voiced Player is burnt within the book, a ticking clock, heart monitor.

Musical Cues: Jane Elphinstone brews up a heady theatrical atmosphere, a masquerade you might say! Her scores for Davros and The Rapture (with Jim Mortimore) were similarly excellent. The ball is resplendent with string instruments creating a royal atmosphere. There’s a wonderfully psychotic sting that sounds like circus jingle gone a little mad. A militaristic theme for the clockwork guards. The music is breathtaking as Benny starts catching the rhyming verse of the Player, male vocals rising in pitch as she is transformed into the story.

Isn’t it Odd: Get out of here!

Standout Scene: I honestly couldn’t choose, this is one of those stories of the Jubilee and Holy Terror ilk that is comprised of one magical moment after another. Although Benny’s rhyming jousting with the Player at the climax is probably my all time favourite audio scene, it’s dazzlingly scrumptious, witty and wonderful!

Result: A unique audio production that brews an intoxicating taste of theatre. We haven’t had such an appetizingly inventive and hilarious script like this since the series kicked off with Oh No It Isn’t and it goes for the jugular deconstructing the series, its elements and its sense of theatre with real panache. John Ainsworth is one of the unsung Big Finish directors and he directs this story with a touch of magic, coaxing some incredibly entertaining performances from the cast and Jane Elphinstone scores the insane events to perfection. Great characterisation of Bernice too, revealing the strengths and weaknesses of her personality, taking a look at her appeal as a fictional character and showing her fight to hold onto her identity as a real person. Stewart Sheargold has written one of the best Big Finish scripts, its devilishly clever and thoughtful whilst being insanely pleasurable at the same time – only Rob Shearman could top this level of imagination and adroitness. A highly recommended touch of class from this extraordinary range: 10/10

Buy it from Big Finish (go on, its bloody good!) here: http://www.bigfinish.com/54-Bernice-Summerfield-The-Masquerade-Of-Death
Posted by Doc Oho at 13:04