Nevermore written by Alan Barnes and directed by Nicholas Briggs 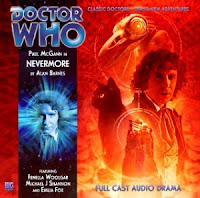 What’s it about: A bizarre manifestation in the Control Room forces the TARDIS onto the Plutonian shores of the irradiated world Nevermore, whose sole inhabitant is the war criminal Morella Wendigo – a prisoner of this devastated planet. But the Doctor and his new companion aren’t Morella’s only visitors. Senior Prosecutor Uglosi fears the arrival of an assassin, after the blood of his prize prisoner. An assassin with claws… There’s no escape from Nevermore, whose raven-like robot jailers serve to demonstrate Uglosi’s macabre obsession with the works of the 19th century horror writer Edgar Allan Poe. An obsession that might yet lead to the premature burial of everyone on the planet’s surface – wreathed in the mist they call the Red Death!

Breathless Romantic: There’s two types of man that’s not interested in women, ones a serial killer and the other is one who lives at home a loves his cat…and it’s nothing to be ashamed of! He has an infinity of worlds to show Tamsin. Nevermore quoth the raven, the red death…the Doctor is well versed in the works of Poe. Paul McGann has the perfect voice to recite Poe, silky and smooth and perfect to lull you into a false sense of security before hitting you with the macabre imagery and uneasy atmosphere of his work. He loves a locked room mystery although not so much when he is the most obvious suspect! A former protégé of the handcuff king himself! The Doctor was in Baltimore when his title was mistaken for a medical qualification and the Doctor caught sight of Edgar Allen Poe in a circle of inebriates talking of spectres and phantoms that walk amongst them – the Doctor saw the final words Poe had ever written before dying in the gutter. Personally he thinks Enid Blyton is the best author who has ever put pen to paper. The Doctor was responsible for pouring the last of Poe’s work into the gutter.

Tempting Tamsin: I would have thought it impossible to follow Lucie Miller but Tamsin makes an instant impression and has a great penchant for commenting dryly on the Doctor’s adventures without anybody actually realising she is doing it! What is interesting to remember is that Lucie and the Doctor didn’t exactly hit it off and yet Tamsin seems to find her groove with him (if not their adventures) straight away and whilst she enjoys throwing out witty retorts similar to Lucie she has a far more middle class way of doing it. I think this is going to be an interesting relationship to watch. Has a penchant for using pop culture references – ‘Animals do the funniest things!’ She’s not impressed by the drama of the TARDIS landing. Tamsin gets wobbly legs when she realises she is on an alien planet and refuses to let the Doctor abandon the icklewickle cat (‘I bet somewhere in time and space there is a lamp post with you picture on it.’). Does she lack intelligence or just a sense of humour? Morelli has gone 20 years without human contact and she is bored with Tamsin within seconds (‘Gosh somewhere there’s a charm school that ought to give out refunds’). Did a circus arts module at drama school and manages to slip free of her manacles when the Doctor completely fails to do so. She did contortionism but that was years ago before the invention of mochachinos so slipping away in a tiny crawlspace is impossible! Tamsin waking up in a coffin is genuinely disturbing, being trapped in tight spaces terrifies me and Niky Wardley plays that claustrophobia very well. They mistake Tamsin for a Time Lord and her one heart almost stops. She’d hate to think the future would always be quite this grim.

Standout Performance: Emilia Fox and Fenella Woolgar are two of my favourite actresses so I’m surprised that their gorgeous natural accents were disguised behind American accents! Another impressive guest cast but what stood out for me in this story were our two heroes, Paul McGann and Niky Wardley who have instant chemistry and both enjoy a fair size of the action.

Sparkling Dialogue: ‘Broom! Broom!’ ‘What’s the car impression in aid of?’
‘This was Edgar all over…never use one word when ten will do!’
‘Yes that’s kind of vague…’ – what do you expect Tamsin – it is based on Poe!
‘Sometimes all I am is a cat’s-paw…’

Great Ideas: The gymnasium in the TARDIS looks more like a torture chamber and a mile of Margate, greenhouse and sauna. The Doctor takes Tamsin on a three-hour tour of the TARDIS. Great big talking Ravens as prison guards! Once they called it Corinth Minor, a little diamond nestling amongst the rough in Cassiopeia, a popular holiday destination, the volcanoes showering with semi precious gemstones. It was Corinth Minor’s misfortune to become a playground for the rich and famous including General Verdeghast who was embroiled in a particularly nasty factional with another of the Cassiopeian colonies. A rival commander saw and opportunity to stage an assassination and detonated a bacteriological weapon in Corinth Minors troposphere. Faced with an outbreak of a flesh eating plague in such a densely populated region the galactic authorities sought the help of the Time Lords who passed the planet through a cloud of super violet radiation – a kill or cure approach. A few survived for a time but the red death held dominion over all. The authorities renamed Corinth Minor Nevermore as a reminder of the follies of war. Morella Wendigo unleashed the poison and was condemned to stay on the planet that she destroyed. The cat is the murderer! Uglosy’s torture of the Doctor is a fantasy being piped through his ears…but for a moment you do wonder. Why would the Time Lords be carrying out executions on Nevermore 20 years after it was sterilised unless they had something to hide? When the war was only six weeks old, a strange little man was brought before Uglosy’s court with a charge of vagrancy but claimed he could change the planets fate for the better, a time traveller. He was responsible for Wendigo killing Verdeghast and ending the arms trade – a class one temporal intervention. The Time Lords wiping out their own mess. Uglosi adopted Berenice, possibly as a penance but she was a mutant who leaches psychic energy from those around her feeding a shadow entity of some kind. A black cat all those years living inside Berenice, drawn to kill anybody who knows Uglosi’s secret and he orders the Ravens to kill his own daughter. The survivors of the Red Death latched onto the only living creature on Nevermore, Wendigo and are now living within her.

Audio Landscape: Footsteps, the beach with lapping waves and seagulls, greenhouse crickets, sauna steam, sleeping cat, hissing and scratching, the voices of the crows are unforgettable – they literally sound like somebody retching and talking at the same time, the have great clumping footsteps as well with a squelching finish, hissing mist, the blades of a landing craft, the Raven’s rendering the Doctor and Tamsin insensible sounds horrible, the sweep of the pendulum, the deliriously calming beach noises that suddenly cut away as Tamsin wakes up, the purring 12 foot long pussy, Berenice’s death is hysterical and messy.

Musical Cues: Love the dramatic stings as the ship touches down on Nevermore. There’s a wonderfully creepy piece that sounds like something crawling down your spine. It’s another unstoppable Jamie Robertson score - go listen to his foot tappingly exciting score when the Doctor explains what has been hiding inside Berenice.

Isn’t it Odd: The way Alan Barnes manages to weave Poe’s works into a Doctor Who location is very imaginative but I did find the continual use of quotes pushing the references a bit too far.

Standout Scene: Join Tamsin as she wakes up in a coffin and panics so much her heart almost gives out. If that wont warm you to the character nothing will.

Notes: Just who was this time traveller that prompted Uglosi to bring Nevermore into being? That’s the second story in the role that suggests mischievous Time Lord intervention…

Result: A story that definitely needs several listens to bring all of its riches to the surface. On my first listen I was confused by the insane deluge of crazy sounds and the incomprensibly dense storytelling but upon my second listen I was shocked to discover a very clever Poe inspired tale marbled with twisted ideas and an incredible soundscape and musical score. Nevermore wont work for everybody but if you like a touch of dark poetry in your science fiction and moments of genuine horror and surrealism you will definitely get a lot from Alan Barnes’ experimental piece. Some have commented that this wasn’t a great introductory story for Tamsin but I disagree, she gets to be funny, cute, sympathetic and appalled and sees the Doctor’s adventures close up for the terror they can bring. I have a few issues about disguising the incredible guest cast behind American accents but that aside I found Nevermore to be an engaging and brave story, for once trading a jolly adventure for something a bit more disturbing: 8/10
Posted by Doc Oho at 01:36

Enid Blyton is the best author? And I thought I couldn't love The Doctor more...