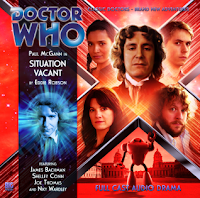 What’s it about: TRAVELLER IN TIME AND SPACE seeks male or female companion with good sense of humour for adventures in the Fourth and Fifth Dimensions. No experience necessary. No time wasters, no space wasters please.

Breathless Romantic: My first thought was surely the Doctor would never set something like this up? And of course he hasn’t but that doesn’t stop the story pretending for a while… The only time waster is the Doctor and he is late himself! He’s a time traveller and can turn up on time if he wants to…so he must be turning up late on purpose! He fights injustice…and stuff. His last friend is off on travels of her own and has set the bar pretty high for this lot. He relies on his companions for advice, help, alternative opinions and camaraderie; he’s relied on their skills, knowledge, bravery and sense of morality. You need to be self-motivated and capable of working harmoniously with him. He doesn’t want selfishness, close mindedness, disloyalty. He’s asked the four of them there to see which one of them has the qualities he is after. I love how wings it, asking for a copy of the agenda because he never set this thing up in the first place. Not impressed with any of them because their logic was way off, some went looking for a villain and the others overreacted. Its really funny how he gets to eliminate one of them – has Doctor Who ever felt more contemporary. The Doctor saw the Apprentice style companion advert in a newspaper three weeks ago and was curious, called the number and was told they had whittled the candidates down to four for him and he decided to play along to find out what was going on. The Doctor actually chooses Hugh for his companion, which proves that he isn’t as good a judge of character as we might have thought and he even asks Rachel the hotel receptionist if she wants to come along. The Doctor didn’t much like Juliet but he might get to like Tamsin.

The Apprentices: Asher Keresy – the chance to travel through time and space would be like a dream come true for her! Hugh Bainbridge – the whole idea sounds smashing and he knows how to handle himself! Juliet Walsh – has been looking for something like this for some time and has qualities that only someone like the Doctor would fully appreciate. Theo Lawson – wants to join the Doctor because the world is so limited and the people are just so narrow! Juliet and Hugh run away from an alien and wonder why it isn’t chasing after them…and so they rush back into the room and knock the poor old thing unconscious as it was listening at the door! Theo assumes Doctor Pallister is the culprit and seizes him and tries removing his disguise! Asher and Theo tell all the scientists that they are all in terrible danger and cause far more panic than there already was and end up trapped outside themselves! Asher’s real name is Lantice and she has been stranded on Earth for the past fifteen years, she was on an intelligence mission and considered the Doctor’s competition as an offer of a lift home and all she has to do is kill him for that to happen. Theo uses this as an opportunity to take over all the computers in the world – travelling with the Doctor did seem like a nice way out of the trouble he has gotten into hacking into a multi national bank or two as a way of getting a little extra pocket money. He caused the global recession! He thought he would use the Doctor to escape the planet but has decided to take over the world now instead. Juliet is in fact an actress called Tamsin Drew who did an advert for leg wax a few years back (‘A bit embarrassing…’). Hugh is in fact a vampire and it is an annoying quirk of his people that they have to be invited in before they can cross the threshold and thus had to win the competition so he could get a foot in the door. He wants the Doctor’s genetic signature by drinking his blood so he can control the TARDIS. Tamsin had a vampires fangs at her throat today and she honestly thinks she would rather go through that again than fill out anymore application forms for jobs that she doesn’t want – at least with an audition you know you are putting on a performance. When it came for all the acting gigs that she wanted she never got the callbacks.

Standout Performance: It’s a well cast story to suggest that any of the candidates might wind up being the Doctor’s assistant but Niky Wardley’s less than successful Juliet (um, Tamsin) does stand out from the crowd because she turns on a sixpence from trying so hard in the first episode to being utterly defeated in the second. Kudos to Paul McGann who tip toes his way through all the comic madness with a deftness of touch, he’s really good ant being the straight man to all the comic gold going on around him.

Sparkling Dialogue: ‘I’ve met people on the internet who claim they are aliens and you go prove it and they’re like ‘how dare you doubt me’ and go off in a huff.’
‘When we tell the Doctor about this we can definitely put a more heroic spin on it.’
‘Please don’t bear us in mind for your next event.’
‘Nice try Doctor. PS…run!’
‘Mind you I can’t help feeling sorry for whatever poor devil ended up getting the job…’

Great Ideas: The very idea of the Doctor holding auditions for his latest companion is wonderful although I wondered how they would justify such an absurd and frankly out of character act. The Chesterton award? A conference attended by some of the top research scientists from around the world and some of them have been going missing – the first test for the apprentices is to discover exactly what is going on. Doctor Gardiner vanishes into thin air in front of Juliet and Hugh and the latter takes a picture of the wall of where he disappeared! Vodium, a new mineral that has the capacity to create tiny wormholes and that’s why people have started to disappear because the energy is leaking out and trying to head back to where it belongs. A new and deadlier menace stalking London as the second test – a giant robot on the rampage!

Musical Cues: Jamie Robertson is my favourite sound designer and musician and he provides an accomplished score for an unforgettable episode. The first scene has a lovely comic, bouncy theme tune suggesting the fun that is to come. There’s some funky percussion music throughout that gives the story a delicious witty edge. The music turns bombastic and very exciting in the second episode, as the threat gets more epic. There’s an upbeat violin score that breaks into the action in the second episode that really lifts the spirits.

Isn’t it Odd: All of the apprentices are well performed but its quite unfortunate that Shelly Conn and Niky Wardley sound so similar.

Standout Scene: After Asher is outed and Theo is murdered, I loved the final TARDIS scene that sees Tamsin revealed and Hugh’s vampiric tendencies – through a process of the candidates eliminating themselves the Doctor gains his assistant, the only person who was never in the running.

Notes: A contract has been put out on whoever really did place the act. The venue was changed when the list of candidates were siphoned down from 12 to 4 deliberately so the Doctor could deal with all the megalomaniacs and psychopaths whilst the person who really set up the advertisement could work his way through the remaining 8 candidates and get a really great companion. Another time traveller out there looking for a companion with a ransom on his head. But who is it…? There isn’t too long to wait but even so it is a deliciously mysterious kick into the heart of the season.

Result: A comic gem with a premise to die for, the fourth series of the EDAs has gotten off to a great start. Paul McGann works so well in the funnier stories (Max Warp, Grand Theft Cosmos) it is a wonder that they torture him as much as they do! The four potential companions are a lot of fun and all have distinct, equally inept personalities and are well cast so you think that any of them could potentially act as Lucie Miller’s replacement. The first episode really plays up to its X-Factor/Apprentice roots with the Doctor hilariously walking in on his wannabes inept attempts to solve a mystery and the second episode comes up with one brilliantly insane twists after an another to kick each one of them out of the running. Eddie Robson has written a sparkling script packed full of memorable lines for everybody and deserves kudos for making such a crowd-pleasing premise work so intelligently. I was secretly hoping for Joe Thomas to become the companion because he was such a disillusioned rogue but as the season progresses you can see that Niky Wardley’s Tamsin/Juliet was the only real candidate: 9/10
Posted by Doc Oho at 13:10