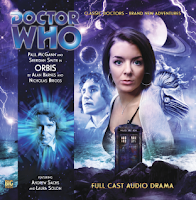 What’s it about: The Doctor has fallen to his death. His companion, Lucie Miller, has returned to her life on Earth, grief-stricken. Then, one night, an alien visitor arrives at her front door and shoots her. Could it be that Lucie’s days with the Doctor are not over? She will only find the answer on the planet Orbis. A planet where all forms of life are facing violent extinction…

Breathless Romantic: Paul McGann gives a looser performance than we have heard since his first season with Charley and it is wonderful to hear him on such form. This is a pretty groundbreaking story for the Doctor since it reveals how a huge chunk of this life has been spent and may have damaging effects on him throughout the rest of the season. They call him ‘old Doctor.’ He misses his old TARDIS and some of his best friends have been bipedal hominids. The Sisterhood teleported the Doctor out of the abyss when he fell with Morbius and plonked him on Orbis. The TARDIS is an old ship without the Doctor she is leaking time waste all over the cosmos, almost weeping for him. ‘Is this pink prawn your protector?’ says the Molluscari of the Doctor! We realise with some horror that the Doctor has been stuck on Orbis for 600 years and doesn’t even remember how Lucie is. You’ll punch the air as he starts to remember his old life. Lucie tells him when he says he is not leaving because he is happy on Orbis: ‘You don’t get it! You travel through time and space. You play tiddlywinks with Tsarina’s and beat up monsters and you’re mad about trains!’ Orbis has changed him; the Keltons took him in, fed him and nurtured him. The Doctor was holding the remote for a Stellar Manipulator when he fell and that was why the Sisterhood saved him. It has been on the seabed of Orbis for 600 years. A puffed up contrary little oik! I was finally convinced that the Doctor really couldn’t remember Lucie when he walked away and left her to die of the time bullet, assuming she was working with the Headhunter. He’s a Time Lord, 600 years is like nothing to him and frankly he doesn’t care much how old he is. The universe doesn’t just stop because the Doctor has decided to play happy families with a bunch of jellyfish for 600 years. The only way he could be forced to leave Orbis is its destruction, which given the way of the series was inevitable.

Luscious Lucie: Sheridan Smith will you marry me? If I wasn’t already married to Maggie Stables it could have really have worked out between us. Her mum would have a fit if she found her dead on the doorstep not to mention her from over the road! When they land on Orbis Lucie is really worried about her appearance when thinking that she will see the Doctor again but suddenly remembers he is Mr Shabby in waistcoat 1769. I was laughing my head off as Lucie was whipped out of the TARDIS into the sea and told by the Headhunter that the sea is heading inland and it will only take her 50 miles to reach it (‘I am so gonna have you for this!’). She wakes up on the shore, saved by a Kelton and starts screaming madly for it not to sting her (‘Ugh jelly!’). I love Lucie; she’s so wonderfully real. She has a thing about jelly because of an incident at a children’s party when she was younger. To Lucie’s everlasting annoyance not only does the Doctor not remember who she is but he dates her at around the nineteen piggin’ eighties! I howled when she slapped him around the face (‘Come here I wanna show you something’ ‘What?’ ‘The back of me ‘and!’) for him calling her Cockney! Their rapport is instantly quite delicious again. She’s like a rabid dog, biting into one of the Kelton tentacles as she is restrained (‘Ugh! Tastes like sushi!’). When the Doctor refuses to leave Lucie shoots him with time bullets to get him in the TARDIS. It wasn’t just for her that she gunned him down but she admits it was for her.

Standout Performance: I’m beyond predictable but Sheridan Smith made me scream with laughter in this story, slapping the Doctor about, jealous of a jellyfish, shooting the Doctor and behaving in generally loutish and hysterical manner.

Sparkling Dialogue: ‘Yeah the Headhunter, we all get it!’ – finally somebody takes the piss out of her name and I’m glad it gets to be Lucie.
‘Are you squatting uncomfortably?’
‘What do they have to do with the price of fish?’ – hahaha! ‘You’ve got tentacles, what d’you need tights for?’
‘I came halfway across the galaxy only to get blown out by a jellyfish!’

Great Ideas: After a dearth of new ideas in the previous two parter it seems Alan Barnes and Nick Briggs have decided to show just how damn imaginative this series can be by introducing a cornucopia of clever ideas to this opening story. Some real thought has gone into the Kelton culture from the language to their structured society, the planet they live on and even their mollusc enemies! Picking up exactly where we left off at the end of The Vengeance of Morbius, the Headhunter has kidnapped Lucie by turning up on her front doorstep and gunning her down with quantum tip time bullets! Tween Space, a layer of cosmic sediment where all the dregs settle – nice name. The universe is being destroyed from the inside out and there is only one person who can stop, someone who Lucie thought was long dead. All this is in the trailer – talk about opening with a bang! Keltons have such blink-and-you’ll-miss-it lifestyles they’d think a mayfly is a bit long in teeth! You can’t fight nature and the rains are drowning Orbis and its people. Time waste soils the very fabric of the universe and rots it away. The Time Lords are still in hiding after the Morbius incident and their TARDISes are few and far between so the Headhunter never one to miss an opportunity has sold the Doctor’s ship! Except the buyer does not want an ailing ship belching out universe destroying matter as it goes! The Doctor convinced the Keltons that eating then regurgitating their dead wasn’t the best way to compost the seabed. The Molluscari travel in Clam Ships, the Great Crustecea leads them and their information is kept in data pearls! They are bullies, coming from their ship and offering a hand of friendship and then pincering the Kelton leaders tentacle! The Molluscari need the waters of Orbis in order to spawn but before that happens they need to feast and they start barbecuing the Kelton on the beach! The moon of Orbis is the Stellar Manipulator, poised in the sky, drawn to the remote device that the Doctor dropped into the ocean. Tragically Orbis is consumed by the Manipulator. The Headhunted admits that the time spillage story was just a cover – the universe does need the Doctor and she was hired to get him back out there although keep listening after the end music as she communicates with somebody, telling them that she has retrieved the Manipulator remote and the operation can begin…

Audio Landscape: Lucie opening her front door and being shot, rain slapping on the mud, the flobbaly bobbaly voices of the Kelton, can you even imagine what molluscs sound like clapping? - the crashing waves of Orbis, Lucie submerged beneath the waves, a sonar screen, the clacking of claws, the Kelton screaming on the beach, a Molluscari shell cracking and the fleshy meat inside exploding, the Molluscari in a feeding frenzy, whipping at the Kelton and eating them hungrily.

Musical Cues: One thing I have noticed is how cinematic the music is for the eighth Doctor adventures, suggesting scale and expense.

Isn’t it Odd: Not a complaint of this story but I wonder how long they can keep up this amnesia lark with the Doctor, or if they will even bother.

Standout Scene: The whole sequence where Lucie and the Doctor discuss his old life at the beginning of episode two it is one witty line after another, delivered by two great actors with stupendous comic timing. The Doctor/Lucie dynamic at its height.

Result: A delightfully offbeat opener to series three, Orbis is about as close to a Disney movie Doctor Who story you will ever get (complete with talking jellyfish, attacking Molluscs, amnesiac heroes and comic sidekicks) and its simply divine to listen to. Orbis is one of the most idiosyncratic of planets with some delightfully observed life forms in the Kelton and the Moscullari and I could happily have listened to more adventures with the carefree Doctor living amongst them. However in bowls Lucie Miller (on electrifying form) and the Headhunter (who has cemented herself as a welcome series regular) and chaos is unleashed on the planet. What a shame that it has to end in such a devastating way because I would have loved to visited Orbis again but it sets up things very nicely for the season long arc. A stylish, imaginative and very funny opening punch for this season: 9/10

Buy it from Big Finish here: http://www.bigfinish.com/31-Doctor-Who-Orbis
Posted by Doc Oho at 00:25

i think this is one of those stories the TV show couldn't hope to do those aliens would break the budget, but big finish pulls off effortlessly. especially the moscullari the bubbly voices paint a perfect picture of them. wonderful stuff

I find it so interesting that you like Lucie Miller so much while I think she's so annoying.
But I liked a lot this story. I was listening while I was walking and couldn't stop laughing at some parts (probably people thought I was crazy ^_^).
The end was quite sad. Poor Keltons. Poor Doctor.
I have to say I liked the idea he lived with them for 600 years. As he said, he was with them for a long time and Lucie (even though he likes her a lot) had a very brief time with him.