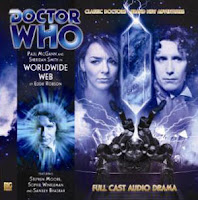 What’s it about: London, 2015. The Doctor’s looking for a lost space probe. Lucie Miller’s feeling just plain lost, on a world she no longer quite belongs to. Perhaps there’s someone who can help. A chance encounter with an old sparring partner leads Lucie to the Eightfold Truth – a bunch of crystal-bearing cranks who reckon a rebel sun is on its way to purge the Earth. As if! But what if they’re right? The apocalypse is upon us. As humankind counts down the last days of its existence, the Doctor races to unmask the Eightfold Truth – and uncovers an old and deadly enemy.

Breathless Romantic: It would appear he is always making the same mistake of assuming that the nastier inhabitants of the universe have been destroyed. He’s rather fond of spiders and cannot understand why the Eight Legs have such an inferiority complex about it! The Doctor’s getaway car is Kelly’s minus a roof! He’s in awe of the Headhunter’s solution.

Luscious Lucie: Unfortunately like most actors when you have to ask them to act possessed they sound highly unconvincing – its only been two episodes but I already miss the old, bull in a china shop Lucie who makes me howl with laughter. Scenes in Lucie’s head between her and the Queen should have been a psychological battle of wits but sounds like playground shoving. The scenes where Lucie is externally arguing with herself sound like they have been recorded at different times and slice together – although I am sure that isn’t the case. When she screamed ‘hiya!’ I felt like punching the air with delight – our Lucie is back! Lucie giggles at what the TARDIS is thinking about the Doctor.

Standout Performance: Not this time, nobody really stood out because they didn’t have the material to do so.

Sparkling Dialogue: ‘We’re not here to kill you…we’re here to save you!’
‘Please tell me that’s just a non-sequiter. Please tell me intelligent mutant spiders aren’t behind all of this.’
‘All Hail the Great One!’
‘Get off my back!’
‘She’s worshipping herself!’ ‘What else is new?’

Great Ideas: Metebelies Three was colonised by humans and when they landed there were perfectly harmless house spiders living in the corner of their spaceship. The spiders crawled away into the caves were the crystals formed and that’s how they mutated, becoming larger and cleverer and then finally taking over. The Eight Legs guard the crystals jealously and their psychic powers are considerable. Came up with a prophecy that could be endlessly deferred, he made the entire religion, the rebel sun, all of it, up but then it started coming true. Before Goodman founded the movement some friends and he found the crystals on a potholing trip in Yorkshire. The Eight Legs were planting thoughts in his brain from the moment he discovered the crystal, manipulating him into creating the Eightfold Truth. A new technical specialist was drafted in – the Headhunter. Dull shapeless nondescript stones from Metebelies Three, very good at deflecting the spiders attacks. The Queen thinks it best that they manipulate the cosmos unseen behind the mask of humanity. The Spiders can move on the astral plane but need a host at the other end. The Spiders are focussing the energies stellar manipulator through the crystals to create the most powerful hive mind in the universe. The Queen has created a virtual space inside the Stellar Manipulator where real and virtual constructs can interact.

Audio Landscape: Chittering spiders legs, the beams shooting from Lucie’s fingers, Karen being taken over, ticking clock, knocking on Kelly’s door, the Eight Legs coursing through the streets killing all and sundry, blowing the roof off a car, the spiders transporting away, the Stellar manipulator activating, alarms ringing, Lucie trapped in the void, Kelly shooting at the Doctor, screams amongst the devotees of the Eight Legs sent to ‘heaven’

Musical Cues: Wonderful bombastic, foot tapping music as the TARDIS tears into action at the climax.

Isn’t it Odd: ‘It’s the end of the world, luv!’ – not sure if this was released before or after The Stolen Earth but sounds awfully like the scene between Rose Tyler and the drunken guy on the street toasting the end of the world. With the Karen Eight Leg going after the Queen this story starts to feel a lot like Planet of the Spiders and a lot less like an end of season spectacular, but in both cases neither feels especially original. The Doctor trying to iron out a turncoat character with a Metebelies Crystal – now it’s the Green Death! Kelly, such a promising new character, is given a perfunctory death scene to get her out of the way after her usefulness is at an end (basically Lucie is on her way back so we don’t need a surrogate companion anymore). What a shame. Proof that you shouldn’t mess about with a proven recipe for success – don’t have Lucie possessed again, this po-faced story needed our regular Lucie to cut through all the seriousness with her witty barbs and throwaway lines. The stellar manipulator has been following the Doctor and Lucie through time via the TARDIS – then might I ask why we didn’t have a few hints that that was the case – a character pointing up into the sky in The Scapegoat and saying ‘What is that?’ or one of the Assemblers questioning a ‘large body of energy’ that has appeared in the system? A few hints and whispers goes a long way. What on Earth is that random scene where they stop for burgers and the Welsh server spouts Eight Legs rhetoric – its not funny or clever or eccentric – it’s just a bit odd? The oddest development here is the Headhunter sacrificing herself to destroy the Great One – an unusual scene considering she has shown no compulsion to save people in the past, treading on them like insects! Whilst I liked the idea of her falling in love with herself its an underwhelming ending for such a long running character and the villainous Great One – they just sort of fizzle away! It was a pretty dull closing tale for the Headhunter considering how wonderfully witty she was in stories like Grand Theft Cosmos and Orbis, she’s hidden in the shadows throughout, is not even the central threat and vanishes in the ether never to be seen again. This isn’t climactic; it’s a waste of a steadily evolving, entertaining character.

Standout Scene: My favourite moment came as the cliffhanger approached and Nick Briggs once again builds up a terrific amount of excitement – astonishing considering the emptiness of threat but I was really disappointed that it turned out to be…the creation of a hive mind. Meh.

Notes: The Doctor and Lucie head off for Christmas in Blackpool where tragic developments await them…

Result: Just like the new series two part finales, the build up is far more engaging than the conclusion and Worldwide Web (great title) proves that the eighth Doctor adventures simple have not got the hang of closing their seasons well (this isn’t quite as offensive as The Vengeance of Morbius but it isn’t much better). Its problems are manifold; a plot that lacks surprises because they were all used up in the two episodes, a badly written battle of wits between Lucie and the Queen that fails to convince, confusing plotting that hops about randomly and fizzles out at the climax (both the Headhunter and Karen get disappointing endings), trading character work for a wealth of technobabble and failing to develop the spiders beyond what we already knew about them (making me wonder…what was the point once again?). Again the saving graces comes from Martin Johnson’s evocative soundscapes and bombastic score but when he is bringing to life such an unengaging story its only superficially enjoyable. In a season that gave us stories as imaginative, amusing and downright delightful as Orbis, The Scapegoat and The Cannibalists, this two part damp squib climaxes the season on a disappointing note: 5/10
Posted by Doc Oho at 02:07