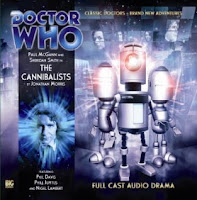 What’s it about: The Haven hangs in space. A vast star city, devoid of life. Organic life, that is. From their high spire, looking out over silent streets and empty plazas, the Assemblers are waiting for the day when the humans arrive. Waiting. Waiting. Waiting…When the TARDIS brings the Doctor and Lucie to the Haven, it seems like Assemblers’ long wait might be over. Living beings! Without batteries! Protocol be praised! Except – they’re headed for the lower levels. They don’t want to do that. That’s where the Cannibalists live. And if the Cannibalists catch them – well, they won’t be living beings much longer…

Breathless Romantic: I love it when Doctor Who is played out through the eyes of non human characters, there was a touch of alien perspective in The Web Planet (making mouths in silent walls, etc) and here Jonny Morris has put some real thought into how robotic life would view humanoid life. Some sort of menial grade drone covered in some strange fabric insulation? Eugh – he’s got a liquid vascular system and a padded outer layer! Its not every day you fall down a ventilation shaft…for him its more like once a week. I was cheering when the Doctor told Lucie that nothing that gives people hope, strength and courage is stupid – the Assemblers died for their protocol because that was what they believed in.

Luscious Lucie: Stop doing interviews at the end of these stories Sheridan Smith! The more you enthuse, the more heterosexual I become! She’s marvellous isn’t she? When Smith talks about doing Doctor Who as a form of escapism and how exciting it is to visit anywhere you would imagine she was the fan reviewing the story! Wandering along endless in the pitch black going God knows where is Lucie’s idea of a good night! Lucie is confronted with the Assemblers and foists upon them the most heinous insult…suggesting they are fit only for the work of menial grade sanitation drones (hovering to you and me). Obviously Lucie is not a human being because she has a distinct lack of facial hair growth, truncated height and has unorthodox protrusions (her breasts!). Likes shopping and relating various anecdotes. When the Doctor fires up the furnace Lucie reassures him with the knowledge that she was never particularly keen on having eyebrows in the first place!

Standout Performance: Phil Davis is really having fun as the mighty Titus (‘I can seeeeeee you!’) and he is a laugh riot throughout (‘Greetings you corroded old scuzzies!’). I loved Oliver Senton and Probus, the minciest, most excitable robot ever known in science fiction!

Sparkling Dialogue: ‘Protocol protect us!’
‘We can do this the painful way or we can do this the excruciating way!’
‘4 2 3 6 C B 2 8 8 3 F D 0…2!’ ‘Very moving!’ – the Doctor gets a tear in his eye at Servo’s hexadecimal machine code poetry. Later we hear another of his pieces: ‘My friend was dismantled before his expiration date was due but I carry his memory within me because if you are carried in the memories of others you have never truly been dismantled.
‘Please don’t patronise me’ ‘Sorry, I’ve been watching too much Star Trek.’
‘You know what they say, the freaks will inherit the Earth.’
‘I’ll see you all next time round you miserable old scuzzies!’ – Titus even gets a wonderful parting riposte!

Great Ideas: The first scene is very familiar, two people running away from unseen horrors but this time it’s quirkily played out with robots! He’s begging for his life as he is taken to pieces (‘Please deactivate me!’). It’s horrible. The Death Metal Gang – bullies that take apart their fellow robots whilst they are still alive. A Star City that looks a bit like Coventry. The Cannibalists look like a cross between a biker gang and a cutlery draw! Humans were supposed to return to the Haven and make it their home but they never came so the robots have gone on repairing the city for when they do. The maintenance drones began to malfunction and they found a way to override their control programmes. There’s the assemblers, the maintenance drones and Servo, the little robot with poetry in his soul. Servo writes poetry to express his psychological responses. Min has the ability to erase the minds of every robot in the city. The Assemblers are born, they build the drones, the drones turn into psychopaths and they hit the reset switch and start all over again. The reset switch isn’t the solution; its what’s causing the problem. The final twist that Star City was surplus to requirements and the humans infected it with a virus that forced the robotic staff to self-destruct is lump in the throat cruel.

Audio Landscape: Hydraulics seizing up, a robot being cannibalised horribly, the Doctor falls down a vent with a scream, clomp clomp footsteps as the chase is on, the crackling fires of the furnace, Minerva’s gorgeous voice, Titus exploding one of his men to get the door open, a quiet wind running through the station as the robots are all wiped.

Standout Scene: The Assemblers sacrificing themselves so the Doctor and Lucie can escape is a touching move and it astonishes how much you feel for these wonderfully ludicrous characters as they are dismantled by the piratical maintenance drones. I never saw the ending coming – I thought the twist would be that the human settlers did come back and they were cannibalised by the psychotic drones but this ending is much more disturbing and poignant.

Result: Huge fun and much more to my tastes than Morris’ Hothouse earlier in the season. If I thought Orbis was akin to a Disney movie then The Cannibalists takes the idea even further with the delightful concept of a bunch of robots abandoned by their human masters and forced to create a civilisation of their own. The exemplary performances and eccentric dialogue makes these robotic characters come alive and you feel appalled for them, as they are ripped apart by the Cannibalists. There are some quirky observations on humanoid constructs (I nearly choked on my coffee when Lucie’s breasts were called unorthodox protuberances!) and Phil Jupitus’ Servo and Phil Davis’ Titus are brilliantly realised characters, one touching and the other a fantastic snarling villain. This story was incredible fun but also surprisingly emotional in places, another winner in this insanely eclectic season. A great location, great characters and great dialogue - what more can you ask for?: 9/10
Posted by Doc Oho at 02:35

I love this story, this one really stood out in the BBC7 run. I wrote about it in my review of stuff from 2010.

Hilarious, and, yes, moving story. One of the most unique and well-realized
of all Big Finish tales.